A month-long strike has virtually closed India’s cinemas but so far resolved little between producers and exhibitors. 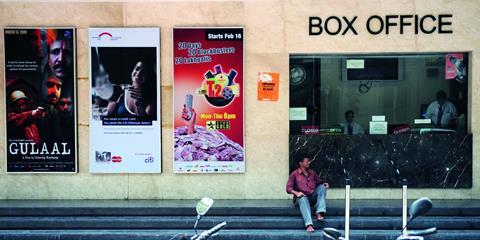 As the Indian producer-distributors prepare to end their month-long strike against the multiplexes, a satisfactory ­settlement seems unlikely.

“Individual multiplexes in India are losing an estimated $3,000-$4,000 every day with only 15% average occupancy”

Piracy has emerged as the only clear winner in the battle over revenue sharing. With fresh releases all but dried up, the movie-starved public has been forced to look elsewhere and the pirate DVD market is booming.
Under the banner of the United Producers’ Forum (UPF), Indian film producers and distributors called the strike on April 4, agreeing to hold back new film releases until the multiplex operators ― which account for 80% of India’s box office ― accede to their demands.

The UPF has demanded 50:50 ­revenue-sharing terms with the multiplexes for an initial period of three years, regardless of cast or budget.

Currently, each film negotiates terms prior to release, with agreements sometimes signed as late as the Thursday night before the release the next morning. Until now, the share for producer-distributors has been 48%, 38% and 30% for the first, second and third week respectively, but with single screens the ratio is 80:20 in favour of distributors.

The UPF’s other demands, which are more likely to be met, are prompt remittance from ticket sales within seven days, and flexibility for producer-distributors to release their films according to their own distribution strategy.
The last major releases before the strike began were Percept Picture Company’s Hindi film 8x10 Tasveer and Paramount Pictures’ Fast & ­Furious on April 3. While the former fared dismally at the box office, the ­latter is understood to have performed well. Eros International’s March 27 release Aa Dekhen Zara was the first casualty after its release was limited to single-screen cinemas.

Since then a handful of B-grade, independent and Hollywood titles have taken advantage of the available multiplex screens. Paramount’s Monsters Vs Aliens, released on April 17, continues a run at the cinemas thanks to the school summer holidays. Other releases, however, including Italian film Out Of Bounds and Thai film Ong Bak 2, have all flopped.

As Screen International went to press, the two sides were due to meet but a resolution seemed unlikely. That said, the UPF would appear to have the upper hand. Producers had been expecting box-office takings to be low this month as the top-rating IPL cricket tournament started on April 18.

Meanwhile, individual multiplexes are losing an estimated $3,000-$4,000 every day with only 15% average occupancy.

The multiplex operators were already hurting as many are highly leveraged and have lost access to capital in the downturn. They argue recent films have been poor quality and are calling for a performance-based model, but the UPF has rejected this.

Meanwhile, single-screen cinemas are suffering as the small films that are being released cannot fill their 1,000-plus seat halls. The country’s ad industry has also been hit by the strike as film releases are usually heavily supported by print, billboard and TV advertising.

Film trade analyst Komal Nahta said: “The stand-off has been a waste of time, especially since neither side is willing to compromise. Although the multiplexes have agreed to submit accounts on time, the revenue-sharing terms are the most important issue. The appalling response to the films that were released in the last month proves good films will run, bad films won’t, especially with recession, high ticket prices and the IPL.”