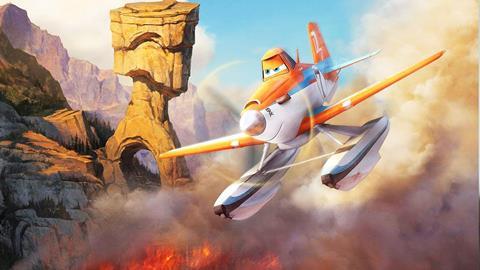 A marked technical upgrade on its 2013 predecessor Planes, which was itself a spinoff of the Cars franchise, animated family film Planes: Fire & Rescue delivers uncomplicated entertainment seemingly aimed most at the pre-school set. Peddling an extraordinarily formulaic, only sporadically engaging story of altruistic friendship and community engagement set against the backdrop of anthropomorphizsed aircraft, the movie most comes alive during a number of well-rendered action and rescue sequences — though not particularly in a way that invites much sustained awe or even sticks with viewers once the theater lights have lifted.

The fire, smoke and deep canyon recesses account for some of the movie’s upgraded visual pop, but Gannaway also makes smarter use of angles and perspective, giving these few scenes a visceral thrill wholly absent in the original Planes.

The grosses of its land-bound ancestors (in 2006 Cars pulled in $462 million worldwide, while its 2011 sequel rang up $560 million worldwide) are but a dream, yet Planes scooped up $220 million last year during its August theatrical run ($130 million of that from overseas), despite dreadful reviews and word-of-mouth that was middling at best. Similar figures seem likely here, while ancillary income opportunities remain robust, given the Disney branding.

Having achieved success in competitive air racing in the first Planes, Dusty Crophopper (Dane Cook) seems poised for further glory when his gearbox falters, curtailing high-speed shenanigans. After a fire breaks out at their small commuter airport, safety officials shut the site down, pending upgrades to outdated firetruck Mayday (Hal Holbrook) and the addition of a second emergency responder. Feeling culpable, Dusty decides to get certified as such, so he heads off to Piston Peak National Park during wildfire season.

There, Dusty trains under the tutelage of the no-nonsense Blade Ranger (Ed Harris), and makes friends with fellow aircraft including Windlifter (Wes Studi) and Dipper (Julie Bowen). For a while Dusty keeps his damaged gearbox and torque limitations a secret, holding out hope that an out-of-production part might be found that could let him return to racing. Eventually, though, against the backdrop of grand disregard for safety measures by Cad Spinner (John Michael Higgins), a fire breaks out, threatening a hotel’s guests and testing Dusty’s true mettle and newly learned abilities.

In what remains an informal yardstick for animated fare, the question remains: does Fire & Rescue manage to work a flatulence joke into its proceedings? Yes, crucially, it does, which is a general indication of the age-level mindset of this offering, co-scripted by returning writer Jeffrey M. Howard and director Bobs Gannaway. The story of adjusted (quite literally, downshifted) dreams and second-act refashioning could bloom into something with an adult resonance, but the filmmakers never push much more than a thumbnail deeper than the surface level, content instead to dote on things like Dipper’s crush on Dusty, and Blade Ranger’s backstory as a former television star.

The A-plot, meanwhile, tracks as a straightforward if awkwardly refracted salute to fire safety heroism (the film opens with a solemn dedication to “courageous firefighters,” though of course there are no humans in this alternate universe).

With more vividly drawn characters, this could still take flight. There’s just not much of nuance or distinction here, however. After its predecessor wanly mined exaggerated accented performances for purported comedic effect, Fire & Rescue does a bit better, though the extent of its entire characterization of Windlifter seems to be that Native Americans speak in abstruse, halting English, and boy is that inherently amusing. (It is not.)

Country star Brad Paisley also lends his talents to a couple tunes, which seems aimed at shoring up the burgeoning franchise’s family base. Returning composer Mark Mancina delivers a lively score that pairs well with the movie’s action sequences.

The fire, smoke and deep canyon recesses account for some of the movie’s upgraded visual pop, but Gannaway also makes smarter use of angles and perspective, giving these few scenes a visceral thrill wholly absent in the original Planes.

Screenplay: Bobs Gannaway & Jeffrey M. Howard, based on a story by Gannaway & Howard