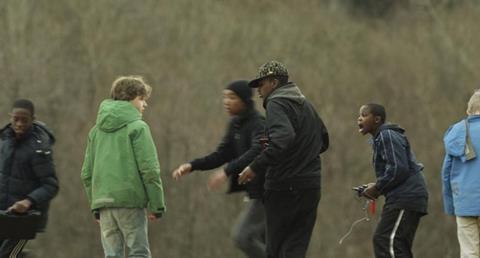 Ruben Ostlund’s thoughtful and occasionally harrowing film Play, about youngsters in Sweden being harassed and robbed of their mobile phones and wallets by a gang of other youths, is a fascinating exercise in psychology in a specific social environment, and makes and interesting companion piece to the director’s last film Involuntary, that screened in official section in Cannes in 2008.

It is certainly a watchable and provocative film.

Set against the inner city backdrop of central Gothenburg, the film details an elaborate scheme known as the “little brother number,” involving role-play and gang rhetoric rather than pure physical violence. Based on a series of real-life incidents recorded by Swedish police, the scheme relies on subtle and implied menace rather than brute force.

With its young cast, languid pace and lack of the dynamism and quirky humour that defined Involuntary, the film could appeal to purveyors of high end art house cinema, but will be a tough film to break into mainstream screens. Thoughtful newspapers articles could accompany, but reviews are likely to be respectful rather than passionate. Festivals will be a likely route.

In a shopping mall in downtown Gothenburg, five youths (all black, with ages ranging from eight or nine to mid-teens) pursue a group of three clearly relatively well-to-do young boys and ask them the time. When one pulls out his mobile phone to look at the time, he is accused of having stolen the phone from the first boy’s “little brother”.

Eventually the five boys arrange a running race, with the winner to get all - with both groups pooling their wallets, phones etc - but naturally the five scammers cheat and the others become their reluctant but consenting victims.

The young non-professional actors are all pretty impressive, but while their psychological manipulation is intriguing it is ultimately never clear why the three harassed youngsters don’t just runaway. Yes they feel ‘threatened’, but all have moments when they could escape…plus it feels inconsistent that they would fall for such a scam in the first place, despite the issue that the story is based on fact.

Play is elegantly shot - entirely filmed in static shots using a Red 4K camera - and while languid at times, it is punctuated by unlikely moments of humour. There are two incongruous shots of a band of Native American Indians in full traditional dress playing music and then having lunch, while there is also a running sub-plot about staff on a train worrying about a wooden baby’s cradle that is blocking exits.

It is certainly a watchable and provocative film, though perhaps feels more of a social exercise rather than a drama. But Ruben Ostlund remains a challenging and thoughtful filmmaker and the film offers plenty of food for thought.