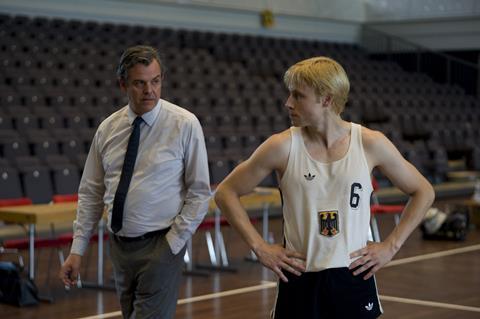 Shot entirely in Germany with an American actor, Danny Huston, in the lead and a multi-national supporting cast, Eran Riklis’ first attempt at a full-blown English-language international production, despite a Best Actor Award shared by Huston in Montreal, is seriously plagued by a messy script and disjointed editing, most likely to limit its future to non-primetime TV slots.

Huston’s mechanical performance can hardly breathe life into a character that is in every single frame of the film.

The idea itself must have sounded tempting – a German Jew returns after 39 years from Israel to coach German basketball players all the way to the World Cup playoffs - but whatever you may be told by the publicity department, this is not the story of legendary Israeli basketball coach Ralph Klein, though it is inspired by an incident in his life. And by changing the protagonist’s name to Max Stoller, the script (written by David Ackerman and Gideon Maron, who happens to be Klein’s son-in-law) is relieved of any commitment to actual facts and historical details.

Furthermore, despite sports tie-in attempts, this is not a film about basketball, but rather about a man coming back to the place where he was born, to work out his childhood trauma. And finally, whatever allusions there might be, this is not a film about the Holocaust, since neither Klein nor the fictitious character based on him, Max Stoller, were in Nazi extermination camps.

After having won two European championships with Tel Aviv Maccabi, Stoller Max ignores massive criticism back home for going to Germany, the country he had to flee in World War 2, to undertake the impossible mission of turning an anonymous and evidently embarrassingly clumsy bunch of basketball players into one of the world’s top teams.

The German media, which couldn’t care less about a sport that rates low on their popularity scale, hounds Stoller, who refuses to speak in German, expecting him to talk about taking revenge on the Germans, something he refrains from doing for almost two thirds of the picture.

Up that point, he insists basketball is the one topic he is concerned with. But instead of dedicating every single minute of the day to building up his team, he prefers to roam on his own in the old neighborhood where he was born, to visit the family flat now occupied by a Turkish woman, Deniz (Amira Casar) abandoned by her husband and living with her rebellious teenage daughter, Sema (Selen Savas), and to watch the patisserie downstairs, which turns out to be intimately connected to his memories.

His players, whenever he has time for them, are fed all the tired platitudes about victory being a thing of the mind, which is evidently enough for them to achieve the goal that was set for them. For the rest, his training procedure focuses on his clash with the team’s captain, Thomas (Max Riemelt), who carries his own chip on the shoulder, being the son of Wehrmacht hero who discovered that losers can’t be heroes and drank himself to death.

Reflecting Max Stoller’s personal wartime trauma in those of Deniz and Sema on the one hand and Thomas on the other, is a rather preposterous gambit, given the circumstances. Stoller thinks he is responsible for his father’s death at the hands of the Nazis; Deniz and Sema are haunted by the thought they had been abandoned because of something indefinite they might have done and Thomas blames the whole world for his father’s suicide.

Putting them all next to each other makes for an awkwardly disproportionate comparison. On top of which, the soap-operatic denouement may leave a rather bitter taste with all those who are led to expect here a serious Holocaust-associated conflict.

Huston’s mechanical performance can hardly breathe life into a character that is in every single frame of the film, his main visible features being his compulsive chain smoking habit and his obviously troubled family life, implied by his phone calls home being never answered. Sympathetic performances by Casar and Savas, accompanied by veterans Hanns Zischler and Irm Hermann, are pleasant to watch, but not sufficiently meaningful.