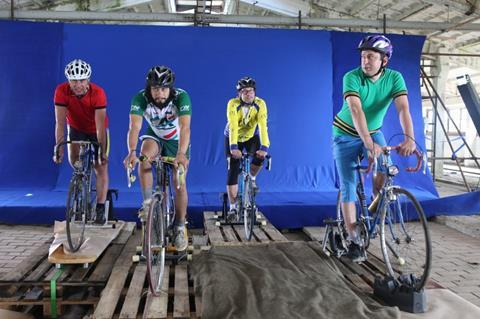 Looking for all purposes like a loosely connected series of TV sketches, not particularly funny nor pungent enough to justify their transition to the big screen, this may have some appeal on the domestic market, which would be familiar with the four actors in the lead parts (Pavel Liska, Tomas Matonoha, Josef Polasek, Marek Daniel), Polski Film is hardly the kind of film that will travel, even an inch, beyond the borders.

The direction looks like very much of a rush job with all four lead actors going over the top in the best vaudeville tradition.

The actors play themselves in the process of making the film you are watching, though what is exactly being shot is never made quite clear.  The gimmick of tying the sequence of pranks together is presumably based on the notion that you invite the audience to share the filmmakers’ experience.

The production is based, as the film itself indicates, on a grant received at a Polish festival, and there is a constant feeling that everything is being improvised and the entire venture is flying by the seat of its pants, hoping not to disintegrate before it comes up with a full length feature film. It is difficult to believe the Karlovy Vary Film Festival, where the film, had its world premiere, couldn’t find anything more suitable to fill the Czech slot in their international competition sesction.

The viewer is supposed to be there with the cast, as they shoot the film within the film. The rickety frame begins by focusing on one actor (Matonoha) left unemployed after he is dropped from a TV series, and who invites three of his actor friends to use the award money to work on a project they had nursed together 20 years ago.

This is the opening gambit, but once introduced, it is quickly dropped in favour of all the personal skirmishes and misunderstandings related to the relations between the four friends - one of them a hypochondriac; the second plagued with an alter-ego personality interfering in his daily life at the most inappropriate moment and the third married to a devout wife, though also speedily introduced are the Polish producer and an inexperienced director (Jan Budar).

The pretense of darker, more serious, undertones inevitably leads to such questions as who contributes what in a multi-national co-production and what control do they expect in exchange or, on a more philosophical level, should the actors in such a film be playing themselves or are the parts they are playing fictional characters or just an extension of themselves. No relevant answer to such questions is ever provided here.

The direction looks like very much of a rush job with all four lead actors going over the top in the best vaudeville tradition and it is hard to believe two additional scriptwriters have been associated with the project. Inserting one’s own criticism of the film inside the dialogue may be a clever ploy to defuse the criticism itself, but in this case it doesn’t really work. For instance, the discussion on the differences between Polish and Czech humor that leads to the conclusion that both are equally humorless. It may easily apply to this film, but like the rest of the wisdom imparted here, it is largely invalid.