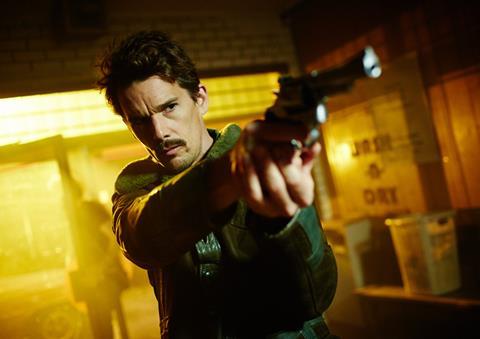 Robert A. Heinlein’s 1958 short story —All You Zombies— is a certified science fiction classic, and the Australian Spierig Brothers take the greatest care to present the mind-scrambling narrative, here wisely renamed Predestination, without cinematic overkill. If only the same could have been said of all those Philip K. Dick makeovers. There will, however, be a price to pay at the box office: this is a complex and frequently baffling story requiring concentration and patience.

Hawke is solid as the questionable hero/villain but it’s Snook who seems (pre)destined for the main attention as a convincingly deep-voiced male who somehow shares the body of an attractive if confused female.

Though the movie has encroaching elements of Marveldom, it is more likely to find an arthouse rather than a multiplex audience. Premiered at SXSW Texas in March, the feature opens the Melbourne International Film Festival on July 31 before a local release in August.

There’s a lot of slow-paced dialogue in the extended setup in a 1970s city bar where a barkeeper (Ethan Hawke) engages a young man (Sarah Snook) in apparently casual conversation. From there, with the aid of a portable time machine resembling a violin case, the action leaps back and forth between the 40s and the 90s. The barkeeper, it turns out, among other amazing things, is a Temporal Agent, “preventing crimes before they exist”.

By announcing that Ms Snook plays the male protagonist this review is already spilling some of the story’s beans. But that twist seems impossible to suppress, especially as her performance as a hermaphrodite is brilliant and quite likely to launch an international career. Rest assured, there are plenty more twists involved, perhaps too many to absorb at a single viewing. This movie will have a long DVD life.

Identical twins Peter and Michael Spierig had an earlier international sci-fi hit with Daybreakers (2009), also starring Hawke. Here they further spread their wings. With attractive camerawork and lighting from veteran Ben Nott, and convincing multi-period settings by designer Matthew Putland, the Spierigs take us on a switchback sci-fi ride, shot in Melbourne but convincingly North American.

Hawke is solid as the questionable hero/villain but it’s Snook who seems (pre)destined for the main attention as a convincingly deep-voiced male who somehow shares the body of an attractive if confused female. Snook made an award-winning impression as a radiant flatmate in the 2012 Australian rom-com Not Suitable For Children. Here she reaches new and unexpected heights.