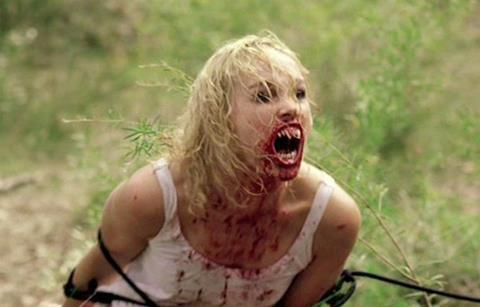 Twelve thousand years after an aboriginal was slaughtered by something man-shaped but monstrous after completing a cliff painting, a group of six assorted pretty young people drive and hike into the wilderness in order to see the painting.  As even those unfamiliar with the likes of The Evil Dead will suspect, the primal evil has lingered – in a peculiarly organic tunnel, a leech-infested pond and some hungry local insects – and will lead to bloodshed.

Without recognisable names or a particularly unique set-up (there have been a slew of terror-in-Australian-byways films recently, including Dying Breed and Rogue), this will be an iffy theatrical prospect, but it’s a notch above most direct-to-DVD monster pictures and will do newcomer Josh Reed (who directs, writes, edits and performs other functions) and the fresh cast no career harm. The film premiered at London’s FrightFest.

As is traditional, first to fall victim is brassy blonde Mel (Krew Boylan), who grows a set of piranha-shark-werewolf teeth and becomes an animalistic menace to her comrades.  Refreshingly, Mel’s boyfriend Chad (Lindsay Travis) isn’t eager to go along with alpha male Dace (Wil Traval) when he tries to persuade heroine Anja (Zoe Tuckwell-Smith) and his own tagalong girlfriend Kris (Rebekah Foord) of the need to hunt and slaughter the possessed girl.

A little too fast-paced and hectic to take advantage of the eerie outback vibes found in Picnic At Hanging Rock or Wolf Creek, this is still a solidly playable horror effort – with a neat sense that all the horrors rise equally from flaws in the young folks’ characters or relationships established before the monster infection sets in.  The profane last line pays off a decent running joke about the context in which the c-word is or is not justified.