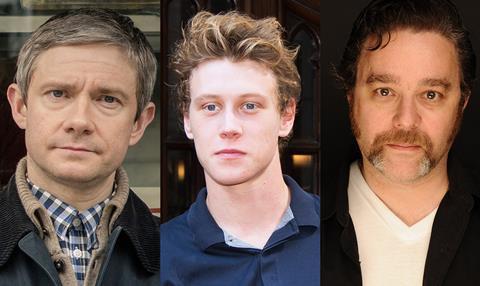 Sherlock co-star Martin Freeman (The Hobbit franchise), George MacKay (Pride) and Andy Nyman (Death At A Funeral) are to star in a feature version of well-received supernatural stage production Ghost Stories, co-written and directed by Jeremy Dyson (The League of Gentlemen) and Nyman, who will reprise his role as professor Goodman.

The stage production of Ghost Stories, compared by critics to The Woman In Black for its scare factor, was a critical and commercial hit when it opened at the Liverpool Playhouse and Lyric Hammersmith before transferring to the West End’s Duke of York’s theatre and later playing in Toronto, Moscow, Sydney, Shanghai and Lima, Peru.

Dyson is best known as a member of sketch comedy team The League of Gentlemen along with Mark Gatiss, Steve Pemberton and Reece Shearsmith. He also co-wrote and directed Sky Arts hit series Psychobitches which won the 2015 Rose D’or for Best Comedy.

Nyman’s acting career has included roles in Kick Ass 2 and Severance and voice roles in Shaun The Sheep and Minions. He is a co-writer and director of magician and illusionist Derren Brown’s TV and stage shows including Russian Roulette, Séance, and Messiah.

Genre aficionado Mike Runagall, managing director of Altitude Film Sales, said: “Having been totally captivated by the original stage show’s devilish plot and unique thrills, we are beyond excited to team-up with the filmmakers to bring this unforgettable, haunting and one of a kind supernatural thriller to audiences worldwide.”

Freeman will next be seen in Marvel’s Captain America: Civil War and alongside Tina Fey in comedy Whiskey Tango Foxtrot.