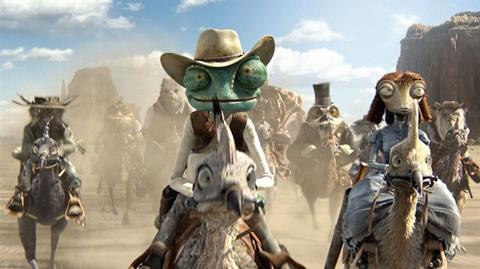 Family animation takes some enjoyably quirky turns in Rango, an eye-catching animal western in which Johnny Depp gives a bravura voice performance for his Pirates Of The Caribbean director Gore Verbinski. The quirkiness should get the GK Films/Nickelodeon production noticed by adults even more than kids. But it doesn’t totally make up for the anaemic story-telling that might ultimately limit the film’s box office appeal.

Rango is full of cute touches and funny moments, some of which are so subtle they get lost in the broader sweep.

Opening through Paramount in the US and several international markets over the weekend of March 4, the PG-rated Rango will have to compete with Disney’s Gnomeo & Juliet and the same studio’s 3D offering Mars Needs Moms. An international roll out through March and April will give the film more breathing space and should considerably boost the box office tally.

Screenwriter John Logan (whose previous credits include Depp’s Sweeney Todd) plays to the grown-ups with frequent allusions to classic westerns, seventies landmarks such as Chinatown and Depp’s eclectic filmography. Depp goes to town voicing the title character, a domesticated chameleon who ends up sheriff of a town of desert beasties whose water supply is controlled by a sinister tortoise mayor (voiced by Ned Beatty channelling John Huston).

Like Depp and Verbinski’s massively successful Pirate movies, Rango is full of cute touches and funny moments, some of which are so subtle they get lost in the broader sweep. Working on its first animated feature, Industrial Light & Magic produces some beautiful images, aided by Roger Deakins, who is credited as ‘cinematography consultant.’

But also like the Pirates movies, Rango feels simultaneously over-stuffed and slow, too packed with detail and short on dramatic momentum.