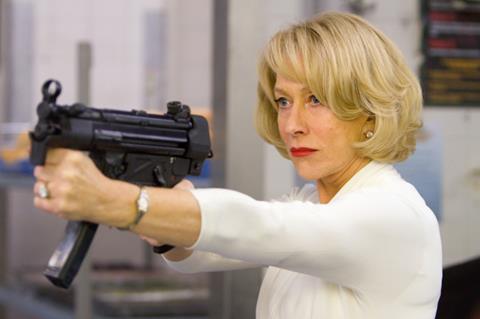 Clearly designed to have even broader global appeal than it’s predecessor, the messy sequel to surprise 2010 hit RED doesn’t stint on gunplay, plot twists, far flung settings or stars – Anthony Hopkins, Catherine Zeta Jones and Korea’s Byung Hun Lee are among those joining Bruce Willis, John Malkovich, Mary-Louise Parker and Helen Mirren this time out. But crucially, the sequel never quite recaptures the refreshing action comedy spirit that helped the original connect – to the tune of almost $200m worldwide – with the growing baby boomer audience.

Taking over from the original film’s Robert Schwentke, director Dean Parisot (Galaxy Quest) orchestrates some fairly effective action sequences that are bigger and more violent than those in the original.

The added action and expanded cast will certainly help producer and domestic distributor Summit Entertainment make the most of the sequel’s July 19 US release date (the original came out in October) and that could be enough to counter what may be mixed word of mouth. And the cast and settings should give independent international distributors, most of which are releasing the sequel in August, a good shot at beating the original’s $109m international take.

Once again working with characters from the RED comic book series, returning writers Jon Hoeber and Erich Hoeber give the sequel a barely comprehensible plot that has Willis’ retired CIA agent Frank Moses being dragged back into a black ops adventure by girlfriend Sarah (Parker) and eccentric former partner Marvin (Malkovich).

Trying to track down a nuclear bomb that went missing during the Cold War, the team jets between the US, Europe and Asia crossing paths with old rivals and colleagues including Mirren’s sexy English sharpshooter and Zeta-Jones’ Russian spy. Hopkins appears as a creepy British scientist and Lee (best known outside Asia for the G.I. Joe films) as a lethal assassin-for-hire. (Morgan Freeman, whose character was killed in the first film, is the only original star missing from the sequel.)

Taking over from the original film’s Robert Schwentke, director Dean Parisot (Galaxy Quest) orchestrates some fairly effective action sequences that are bigger and more violent than those in the original. But when it goes for the kind of winking humour that gave the original much of its charm the sequel feels forced rather than refreshing.

Among the performances, which also made a big contribution to the first film’s zest, Willis and Malkovich are still fun while Mirren appears to get less screen time. Zeta-Jones can’t do much with her very silly role but Lee adds a martial arts flavour that might help the sequel draw a younger demographic.