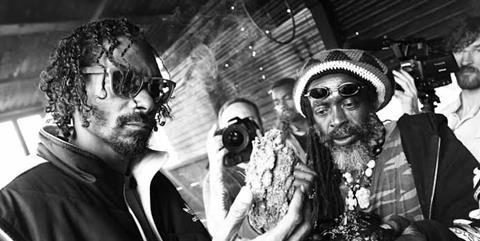 Call him Snoop Lion. The inveterate gangsta, one-time pimp and rapper once known as Snoop Doggy Dogg has grown up, as revealed in this sometimes engaging, often marijuana fueled documentary, and transformed himself into a man of peace, love and family. The primary instrument of Snoop’s rebirth…Reggae music.

While much of Reincarnated’s narrative meanders in a smoke-filled haze, the story eventually deepens, taking on a more confessional tone and revealing some of the root causes of Snoop’s transformation.

Equal parts making-of music chronicle, travelogue and biography, Reincarnated follows Snoop as he travels to Jamaica, records his first all-Reggae album, and learns the spiritual and musical ways of the Reggae legends that inspired him, from Peter Tosh to Bob Marley and the Wailers.

While Reincarnated feels at times like a neatly packaged promotional documentary for Snoop’s forthcoming album, the movie eventually deepens, revealing a surprisingly honest view of a man who appears sincere in his desire to change his life. With Snoop’s marketing savvy and name recognition, the documentary should find a welcoming audience on DVD, VoD and select cable TV spots.

Indeed, Snoop has already proven himself to be a successful brand, having built up a massive musical franchise and several legitimate TV and movie credits, including his own reality show. But while Reincarnated captures a few humorous Snoopisms (“I’m wiser… like Budweiser”), the documentary finds the hip-hop icon during a more serious period of transition and contemplation. Still, he hasn’t abandoned his penchant for weed.

Particularly during the first half of Reincarnated (which was produced by Vice Films, a division of the youth-oriented risqué media company), the documentary has more ganja than Cheech and Chong’s Up In Smoke. “The Herbs,” as they call it in Kingston, are a focal point of the film and its characters; they smoke up in the music studio; sing songs about it; bond over it; and travel to Jamaica’s Blue Mountains on a kind of spliff pilgrimage, where Snoop surprisingly becomes just as enamored of the fresh grapefruit plucked from the trees as the quality of the marijuana. The film also makes clear that pot isn’t a vice; it’s a religious experience for the Rastafari, who pray before toking up and call their bong a “chalice.”

In fact, while the audience for Reincarnated will ostensibly be fans of Snoop and Reggae music, the documentary may be more interesting as a cultural study of the Rastafari culture and the poverty-stricken streets of Jamaica from which it sprouted. For example, there’s one sweet sequence where Snoop visits a school for abandoned and troubled boys and the camera observes the children’s faces light up with the arrival of their famous visitor.

While much of Reincarnated’s narrative meanders in a smoke-filled haze, the story eventually deepens, taking on a more confessional tone and revealing some of the root causes of Snoop’s transformation. Late in the film, Snoop, looking for once more awake than glassy-eyed, openly discusses the pain of losing his longtime “blood” brother, Nate Dogg, as well as the shooting death of his colleague, rap legend Tupac Shakur.

But there are also many aspects of Snoop’s story that remain conspicuously absent. If Snoop has become a better family man, as the film suggests, there is little screen time devoted to his wife, who never gets a chance to speak. Similarly, we only hear briefly and superficially from one of his children. Some viewers may also raise an eyebrow with the appearance of controversial Nation of Islam minister Louis Farrakhan as Snoops’ first spiritual advisor.