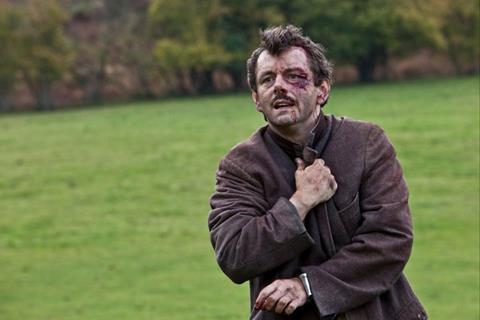 There is a distant echo of the eerie Peter Weir classic Picnic At Hanging Rock in Amit Gupta’s elegant, unhurried first feature Resistance. Set in an alternative wartime Britain in which German forces have successfully crossed the Channel, it is an intriguing tale of loss, isolation and the instinct for survival that unfolds with the chilly air of a ghost story.

It is Andrea Riseborough’s severe Sarah who sets the tone for this anguished, insular story.

The austere emotional temperature and elusive nature of the narrative will restrict its appeal but critical support for Gupta’s debut  and a strong performance from rising star Andrea Riseborough should help to attract theatrical interest. Metrodome releases the film, which premiered at the Cambridge Film Festival, in the UK on November 25.

Working from the premise that the D-Day landings failed in 1944, Resistance is set in a remote Welsh valley where the menfolk have vanished leaving the women to tend the farms and await the arrival of enemy forces.

The invaders prove to be gentlemanly and considerate and Sarah (Andrea Riseborough) gradually warms to homesick captain Albrecht (Tom Wlaschiha) who shares her yearning for a return to a peacetime happiness that now seems forever beyond their reach.

The misty valleys and wintry landscapes of Wales enhance an atmospheric story that sustains an oppressive sense of mystery throughout. Michael Sheen’s brief appearance as a local resistance leader reminds us of the struggle beyond the valley but his character seems to belong to another film. It is Andrea Riseborough’s severe Sarah who sets the tone for this anguished, insular story.

Screenplay: Amit Gupta, Owen Sheers based on the latter’s novel