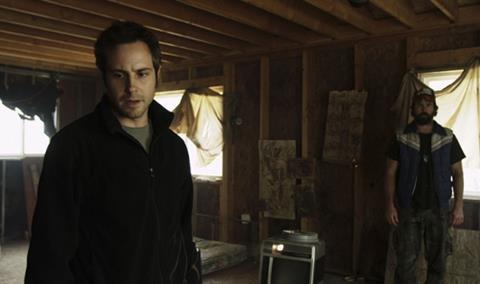 A clever, twisted and very impressive slow-burner of a chiller, US-indie Resolution, which screened at Tribeca and had a successful recent screening at Montreal’s Fantasia International Film Festival, may disappoint horror fans on the lookout for blood-and-gore, but it is a thoughtful tale of something nasty lurking in the woods.

The script is intelligently twisted as the two friends not only tackle the Chris’s addictions and their own relationship, but also the increasingly ominous sense that they are not alone and that something – or someone – is observing and manipulating them.

That old familiar ‘cabin in the woods’ scenario has recently been given a whole new spin by Drew Goddard and Joss Whedon in the horror/sci-fi mash-up The Cabin In The Woods, but Justin Benson and Aaron Moorhead’s film takes a different tack as it weaves a story of two old friends, a drugs intervention, creepy technology and a pinch of the occult.

It is an unpredictable film that revels in its smartly written script and spot-on performances as it weaves its way between film genres and moves in so many unexpected directions that it keeps an audience on their toes. The violence – such that it is – is implied or shot from distance rather than used as a more simplistic horror device.

Chris is clearly not with it. He shoots at birds who are ‘spying’ on him, and mentions that he now has a dog that visits, and that they are “writing a book together, on squirrels…her idea”. Michael manages to subdue Michael and handcuffs him to the wall, planning to dry him out for a week before taking him to rehab.

While Chris is secure in the house, Michael starts taking a series of walks in the woods…he comes across a shed containing film, video and audio recording equipment; three members of a religious cult – played by directors Justin Benson and Aaron Moorhead, along with producer David Lawson - lurking by a stream (they say they are there to let people know the celestial messiah will land his vessel before the end of days); a cave inhabited by a strange man and three Native Americans who claim Chris and Michael are squatting in the house.

The script is intelligently twisted as the two friends not only tackle the Chris’s addictions and their own relationship, but also the increasingly ominous sense that they are not alone and that something – or someone – is observing and manipulating them. Cilella and Curran (especially) are great as the mis-matched friends, and while perhaps too low-key to fully break-out Resolution is certainly one film worth tracking down.