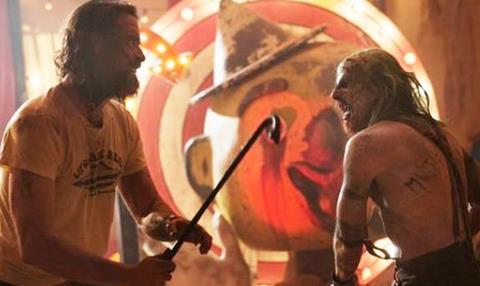 “They call me Doom-Head,” announces a cadaverous, chatty killer (Richard Brake) in bedraggled clown make-up – setting the tone for writer-director Rob Zombie’s latest collage of moments, faces, sick jokes, lines of dialogue and items of carny décor from the history of exploitation cinema.

Zombie’s strength is in his casting, going outside the expected pool of cult players

After a prologue featuring Doom-Head and a doomed-to-be-beheaded clergyman (Daniel Roebuck), the film is entirely set on October 31, 1976.  A camper van of carnies are waylaid on the road in the middle of nowhere by the minions of a triumvirate of English-accented decadents in Versailles finery – Father Murder (Malcolm McDowell), Sister Dragon (Judy Geeson), Sister Serpent (Jane Carr) – and set loose in an overfamiliar derelict factory full of dripping pipes, rusty traps and underlit passageways.

The abductors place bets on who will survive longest against an array of eccentric, ranting and giggling killer clowns with nicknames like Pscyho-Head (Lew Temple), Sick-Head (Pancho Moler), Death-Head (Torsten Vosges) and Sex-Head (E.G. Daily).  Zombie untidily and incoherently kills off half his carnies before reaching the death maze, so the key players are Charly (Sheri Moon Zombie), Roscoe (Jeff Daniel Phillips), Venus Virgo (Meg Foster), Panda (Lawrence Hilton-Jacobs) and Levon (Kevin Jackson) – with a fairly predictable order of disposal.  Several villains are undone by their tendency to stop and make speeches at supposedly helpless victims who then fight back with surprising ferocity.

Gaunt Brake, best known as the man who shot Bruce Wayne’s parents in Batman Begins, gets a rare lead baddie role and chews on it with enthusiasm, even if Zombie’s script offers him more string than meat.  As ever, Zombie is less interested in his normals, and even regular star Sheri Moon Zombie – cast as final girl – has little to do but scream and stagger.

Zombie’s filmmaking career began with inventive pop videos for his band White Zombie and he can still frame an interesting shot or layer in an unusual and affecting snatch of music, but after six features he still can’t come up with a fresh story, write characters with more depth than their make-up or direct stalking scenes that are suspenseful or moments of gory violence that are shocking.  His enclosed, referential universe – here, one scene is a supposedly straight reprise of a comedy cannibal bit from The Rocky Horror Picture Show – is like the circus puppet display that’s the keynote visual of 31: wooden people jerking about repetitively and hacking each other to bits.