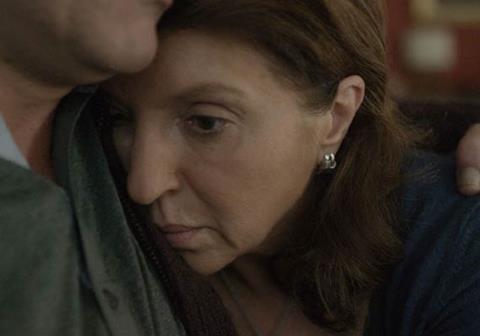 The memories of atrocities from the Yugoslav war return to haunt a comfortable family inSerbia in the directorial debut of the actress Mirjana Karanovic (Grbavica).  A wife, at 50, learns that one of the wartime killers is her husband, a jovial family man.

Unpunished massacres once again inspire a film from the former Yugoslavia. A Good Wife is the product of an alliance (cinematic, at least) of three lands that were locked in a brutal war in the 1990’s – Serbia, Bosnia and Herzegovina, and Croatia.

Karanovic, acting in the lead, also co-wrote the slow-burning family drama, in which the personal collides with the political. She plays Milena, the mother of a seemingly ideal family who is diagnosed with breast cancer just as she finds an old video-cassette showing her husband Vlada (Boris Isakovic) in an army unit rounding up innocent civilians, humiliating them, and gunning them down in the snow.

Like the cancer that appears in an x-ray, war atrocities can’t be denied when there’s videotape. It’s a powerful metaphor, although Karanavic will be recognised more for her portrayal of a woman facing dreaded revelations at the age of 50 than for her competent but dutiful directing.

A Good Wife has a title that that could be confused with that of the popular American television series if it opens in English-speaking countries.  The film is sure to travel widely on the festival circuit, yet the drama’s theatrical range will be limited. Karanovic will still probably be mentioned when European awards come up at the end of the year.

Forbearing maternal characters are a staple for the sad-eyed Karanovic, who drew international attention playing the mother of the child narrator in When Father Was Away on Business (Palme d’Or, 1985). She also starred in Grbavica (Golden Bear, 2006), a mother-daughter drama about the lasting trauma of rape in the Yugoslav war. Her performance here is devoid of vanity, as Milena confronts her own ageing, and stands glumly with her breasts exposed for long takes as she gazes into the mirror or as she endures repeated examinations. Scenes of her having sex with Vlada are anything but erotic. Those moments, and explosive ensemble scenes with other couples struggling with middle age, remind you that the passage of time is another truth that’s hard to deny.

The source for A Good Wife is the Scorpions case of 1995. Special Serbian units called Scorpions murdered six Bosnian captives in Srebrenica  (three of them minors). They videotaped the killings (and slaughtered far more victims than they filmed). In Karanovic’s drama, flashbacks of the shootings by bored and indifferent troops are brief, but grim enough to exhume images that have come to define the Yugoslav war. (A question arises – given the notoriety of the Scorpions, and the fact that many of its veterans settled in a provincial town like the one in A Good Wife, is it plausible that Milena would not have know about her husband’s past?)

As Vlada, the war veteran, Boris Isakovic is the convivial paterfamilias who seethes with fury that secrets suppressed for decades could show war heroes to be murderers. Nata (Hristina Popovic), one of the couple’s three children, is estranged from her father because of her research on war crimes.  Her character and the family’s two other children feel like wooden building blocks that outline the past and present of contemporary Serbia.

Bojan Navojec, a Croatian in the mostly Serb cast, brings a drunken despair and the incendiary risk of going public to the character of Dejan, a veteran of Vlada’s unit who medicates his postwar maladjustment with alcohol.

Production companies: This and That Productions