'A Lullaby To The Sorrowful Mystery': Berlin Review 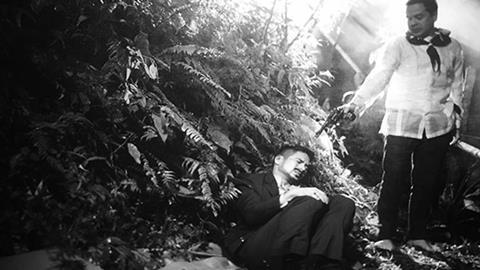 Many films by Filipino director Lav Diaz take place wholly or partly in forests - and the feeling of being lost in one has never been so bewitchingly acute as in A Lullaby to the Sorrowful Mystery, his latest fictional contemplation of the history and politics of the Philippines. Clocking in at just over eight hours – although it’s hardly the longest from this diehard of durational cinema – this confusing, slightly patchy but overall mesmerising weave of narratives, and of history and myth, will be a considerably harder sell than the already tough Norte, The End of History (2013), a mere bagatelle at five hours. While only the most audacious distributors will approach, festivals should prepare to clear the schedules for an ambitious statement by one of contemporary cinema’s authentic radicals.

After the exuberant magic of the first half, things turn a little somnolent for much of the final stretch

The multi-strand ensemble drama is set ostensibly in 1896-97, during the days of the Philippine Revolution, although there’s an increasingly cavalier poetic license with costumes, props and even dialogue when it comes to historical verisimilitude. The film begins with a young man, a musician and singer, taking leave of his beloved before going to join the Revolution – not before stopping to witness the execution of revolutionary author José Rizal.

This young man, seemingly the film’s protagonist, soon drops abruptly out of the action, as so happens in Diaz films – but there are more than enough characters, some real-life figures, to keep the action going.  One thread of the narrative follows Gregoria (Hazel Orencio), a young woman in search of the body of her lover, murdered revolutionary Andres Bonifacio. She ends up travelling with Cesaria (Alessandra de Rossi), a young woman haunted by her part in causing a terrible massacre.

Then there’s the Byronic gangster-like figure of Simoun (Piolo Pascual), a tainted idealist who wants the best for the people, but at first mysteriously seems in cahoots with the occupying Spanish forces out to crush dissent. Also drifting in and out are three larky tikbalangs, mythical half-man, half-horse beings (although here they’re seen in mainly human, albeit oddball form) who pull the strings of the human characters like sprites in a Shakespeare play, occasionally letting out a neigh while they do so.

Photographed in magnificently textured high-contrast black and white (and in Academy ratio) by Larry Manda, the film is unfailingly gorgeous and deeply visual – although it’s often uncomfortably heavy on the dialogue, with many scenes filled by long disquisitions on the destiny of the Philippine nation.

This, coupled with the often incantatory delivery and the sometimes opaque narrative, undoubtedly makes the film hard going at times – and after the exuberant magic of the first half, things turn a little somnolent for much of the final stretch, as student and poet Isagani (John Lloyd Cruz) goes on the lam with wounded Simoun. But when the film reaches its operatic coda,  the emotional surge does delives a cathartic payoff. And there are strange, magical moments a-plenty: like the scene in which the forest in invaded by an army of religious cultists in white, or the non-sequitur appearance of a highly camp contingent of ‘Quiroga’s ladies’ (whoever they may be).

The populous cast contains assorted Diaz regulars such as Angel Aquino and Sid Lucero. Dialogue is in Tagalog with some Spanish, and sometimes hair-raisingly anachronistic English, as Simoun and a Spanish commander of practically moustache-curling villainy discuss the course of the action in amusingly self-referential terms: “I’ll just wait for the next chapter to unfold and flow with it” (sic). The viewer can only do likewise.