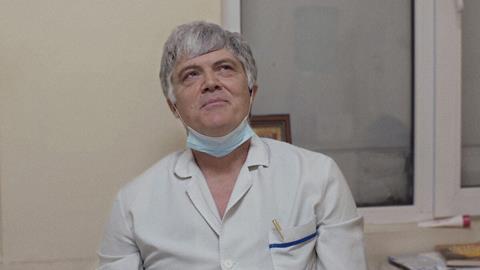 A decade after his feature-length debut Sofia’s Last Ambulance, Bulgarian director Ilian Metev returns to his country’s healthcare system with another empathetic, observational documentary. A Provincial Hospital, this time made in tandem with Ivan Chertov and Zlatina Teneva, chronicles what appears to be a couple of weeks in the eponymous establishment, mainly focusing on the pulmonary ward—this being late 2020, the ward is almost entirely occupied by Covid-19 patients.

An accomplished coronavirus-themed documentary, this unfussy but sensitively-handled film—premiering in the main Crystal Globe competition at Karlovy Vary and later likely to prove a popular choice for festivals and small-screen formats—sets quite a high benchmark for those that will inevitably follow.

Stuck in London lockdown in London during the filming, Metev (whose fictional-feature 2017 debut 3/4 won a top prize at Locarno) supervised from afar as Chertov and Teneva’s gathered material at the hospital in Kyustendil in Bulgaria’s rural far west and edited their footage solo. Located about 30km from the borders with North Macedonia and Serbia, Kyustendil is less than 100km from Sofia; its hospital—neither immaculately state-of-the-art nor notably ramshackle—is probably a reasonably representative microcosm of how healthcare professionals handled the worst of the pandemic in Europe and further afield.

As in Sofia’s Last Ambulance, the emphasis is more on the frontline staff than on the patients, though in contrast to Metev’s previous documentary—which carefully concealed the identities of those being treated—the latter are shown and named here. They gradually emerge as protagonists, with attitudes ranging from the haplessly helpless to the co-operative to the downright obstinate. The credits list 13 members of the main “cast” with an additional 35 individual who have more fleeting screentime; if there is a first among equals here it is the middle-aged, flintily sympathetic Dr Popov. Popov is able to make such an impact partly because we often see him in his office with his mask off; most of the rest of the staff are concealed behind layers of protective equipment including double-masking.

The logistical difficulties of conducting an enterprise like A Provincial Hospital are obvious; editor Metev sensibly leaves in numerous moments when the picture’s subjects chat and interact with Chertov and Teneva, although the pair remains off-camera virtually throughout. There is no fly-on-the-wall pretense here; the fact of the filming is frequently mentioned: “Don’t let him fall on camera!” one orderly cautions a colleague when transporting a recently-deceased individual down a corridor.

And while the presence in the credits of a “foley editor” (Tsvetan Kadiyski) indicates that what we are experiencing is not exactly unvarnished reportage, the film never feels anything other than a convincingly accurate evocation of its chosen time and place. The vast bulk of the running-time, punctuated into segments with black screen, takes place within the confines of the building; a couple of fleeting glimpses at the bosky world outside in the latter stages function as gently transcendent grace-notes.

As usual in the healthcare-documentary sub-genre (of which Sofia’s Last Ambulance was also a solid example), we marvel at the hard work and (mainly) cheerful attitude of the personnel in the face of circumstances that are often tough and sometimes tragic. And as usual the staff use hard-knock humour to get along; a trait shared by those patients who retain enough oxygen in their lungs to work up a laugh.