'A Taste Of Sky': Tribeca Review 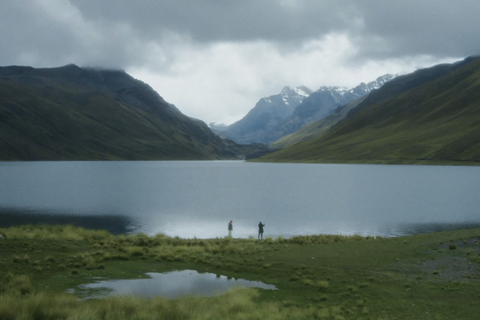 The test of a satisfying film about fine dining is its ability to stimulate the brain as well as make viewers salivate. A Taste Of Sky, which looks at how the Danish culinary entrepreneur Claus Meyer has mentored aspiring young Bolivian chefs, raises issues about family life, ambition, and women’s opportunities while whetting the appetite with spectacular imagery – topographic as well as gastronomic. Likely headed for a streaming channel, Michael Yuchen Lei’s feature debut should transcend its appeal to foodies.

Meyer’s goal was to create jobs and foster entrepreneurship while starting a Bolivian food movement.

Screening in the Tribeca Film Festival’s Documentary Spotlight section, A Taste of Sky serves as a companion piece to Pierre Deschamps’ Noma: My Perfect Storm (2015), named for the Copenhagen restaurant with which chef René Redzepi, Meyer’s business partner, reinvented and popularised Nordic cuisine. Inspired by their success, which was based on creating luxury dining from locally sourced foods, Meyer decided to export the idea. “What if I could take it from a rich country and give it away to a poor country?,” he says in Lei’s film. He chose Bolivia, the poorest country in South America but one with a diversity of enticingly exotic agricultural produce, such as ulupika chiles and Jamaica flower. His goal was to create jobs and foster entrepreneurship while starting a Bolivian food movement.

Accompanied by head chef Kamilla Seidler and restaurant manager Michelangelo Costari, Meyer established a non-profit restaurant called Gustu, a bakery, a bistro, and a culinary school in La Paz. The school’s first students, chosen by the mayor for their low-income backgrounds, included Maria Claudia Chura, who was determined to leave her farming life near the Illimano mountain in the Andean altiplano, and Kenzi Hirose, a hunter from San Buenaventura in the Bolivian Amazon. The film begins with a suspenseful night scene in which Kenzi (who once wanted to be a vet) shoots an alligator for gourmet meat. The film follows his and Maria Claude’s journeys from enrolment to graduation as culinary students, and reveals where they headed next.

The middle act interweaves the pair’s backstories via visits to their family homes with Meyer’s own memories of his unhappy upbringing in a dysfunctional middle-class family in a working-class district of southern Denmark. Though the vast economic and cultural disparity between Meyer and his Bolivian protégés makes a comparison between them problematic, the psychological effects of childhood neglect and loss are no less severe in Europe than in South America. As Maria Claudia had to overcome her father’s death and her abandonment by her mother, so Meyer had to overcome his father’s coldness toward him and his mother’s alcoholism. Loving grandmothers gave vital support to both Maria Claudia and Meyer.

Kenzi’s upbringing was more stable. On his trip home to his village, he is welcomed by his grandmother, as well as his parents and his brother, Rolando. The latter also attended Meyer’s culinary school but dropped out and returned to work on their father’s farm. Kenzi says, somewhat ambiguously, that Rolando “made a sacrifice for gastronomy,” but we might impute that Kenzi was simply more driven than his sibling, or that not all South Americans respond to the Western model of the culinary industry. Meyer admits that “it was hard to engage Bolivians” in his project. Since traditional expectations for women entering professional situations remain low in parts of South America, Weidler found that some of those who became students in her charge, including Maria Claudia, were initially hindered by a lack of confidence.

Lei shows Meyer being interviewed by his pre-adolescent daughter Augusta. Her questions about the exemplary Bolivian venture are probing and their conversation allows him to pass onto her his invaluable thoughts on legacy and paying it forward. However, rather than self-consciously assert that he was motivated by “some sort of love and not just to benefit myself in some sort of ugly way,” he possibly should have allowed A Taste of Sky to do the talking for him.