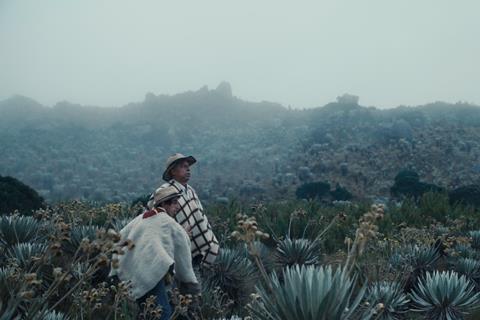 The surrealist André Breton called Mexico the most surrealist country in the world, and in A Vanishing Fog, Augusto Sandino seems to be making a similar claim for Colombia. Sometimes frustrating and sometimes rewarding, but unfailingly provocative, Sandino’s second feature, a hard-to-classify pre-apocalyptic family drama playing out in the Colombian wilds, is everything his 2015 debut, Gentle Breath (which won a Special Jury Prize at Tallin 2016) was not: colourful, expansive and rangy, disorientating without being incoherent, this represents Sandino’s determined bid for auteur status.

In a role presenting remarkable physical challenges, Sebastian Pii carries the film single-handedly and with commitment

A Vanishing Fog has its world premiere at this year’s Tallinn and will doubtless divide festival audiences. Yet even those who can’t wait for it to be over will have to admit that its images are often unforgettable.

Hallerman-Streiff syndrome is a disorder apparently suffered by fewer than 200 people worldwide; among them non-professional actor Sebastián Pii. Pii plays the deeply religious F — perhaps mute, perhaps just silent — who has returned to the Sumapaz Páramo, a huge mountainous area of moorland, to care for his father, ranger Colombo (Mario De Jesús Viana). A hulk of a man, Colombo has lost his wits following the death of his wife, but he may also be a victim of other changes in the nation. (At a symbolic level, Colombo no doubt represents the fatherland.)

With its sweeping vistas of the largest moorland area in the world, the film is both a celebration of its bleak majesty and a critique of the damage being done to it. And the Sumapaz Páramo is a pretty good place to lose your wits. Beautiful but permanently fog-bound, desolate, and sparsely populated, it is also subject to aerial bombardments by the Colombian government against the left-wing militia group that continues to control the area, which is also used for drugs and weapons trafficking.

Otherwise, F is an onlooker, a seemingly invisible figure who interacts with barely anyone: even when there are other characters, he is absent to them, which may, the film suggests, be the sad plight of Colombia’s indigenous. The film features few other characters and practically no dialogue, opting instead for snatches of on-screen text issuing from F’s consciousness. In a film very low on standard exposition, this sometimes comes in handy — “I am the son of Colombo Quisquiza” — and is sometimes just pretentious: “the mind stretches in the midst of visions”, as though we needed telling.

As far as F is concerned, these visions include the discovery, under a white sheet, of a banquet of delicious fruit, and an escalator rising from the earth and heading up, presumably to Heaven. The surreal is never far away and it all adds up to Sandino’s personal vision of what has become of his country — a place whose natural beauty, and man’s place in it, has been destroyed by foreign capital.

In a role presenting remarkable physical challenges, Pii carries the film single-handedly and with commitment. Hallerman-Streiff brings radical physical consequences that the film does not shirk from showing, though exactly why Sandino’s protagonist, striding energetically about in his poncho and wellington boots like a lost character from an old silent movie, needs to be a sufferer is never addressed. It may be the main point of A Vanishing Fog that despite the considerable differences between ourselves and F, by the end of it we have learned to care for him.