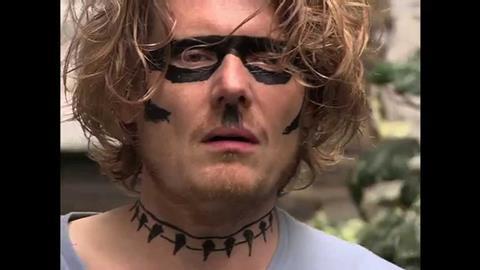 Inhabiting a waste ground somewhere between radical theatre and slob comedy, Steve Oram’s debut as a writer-director-star – following up his writer-actor work on Ben Wheatley’s Sightseers – is liable to corner a small but devoted cult following.  It’s at least as interested in gross-out gags that out-gross the average Hollywood frat-boy film as it is in delivering a skewed yet pointed look at a suburban Britain where everyone communicates in grunts and gestures the way cavemen and women do in Hammer Fillms’ well-remembered prehistoric adventure films (One Million Years BC, When Dinosaurs Ruled the Earth).

In its enthusiasm for poo-flinging, food-fights, penis-chewing, cannibalism, tea-bagging and sudden stabbings, the film sets out to shock in a particularly cosy way

AAAAAAAAH!’s specific precedents might include such one-offs as Richard Lester’s post-apocalyptic The Bed-Sitting Room, Akira Kurosawa’s rubbish-strewn Dodes’ka-den or Claude Faraldo’s Parisian troglodyte drama Themroc, but it’s fresh, distinctive and strange enough on its own and tight enough at 79 minutes not to outwear its welcome.

The characters are given names in the end credits, but not the film itself and conform broadly to archetypes.  A wanderer (Oram) and his devoted sidekick (Tom Meeten) emerge from what seems a jungle but is actually a patch of rained-on suburban woodland, and are drawn to a house where an aggressive washing machine repairman (Julian Rhind-Tutt) has moved in and taken over.

The former breadwinner (Julian Barratt) loiters in the garden, fed scraps of Battenberg cake by his sulky daughter (Lucy Honigman), while his wife (Toyah Willcox) does her best to please the new tyrant at the table.  The wanderer seems set to woo the daughter, challenge the repair-man and restore the outcast to his proper place, but things don’t work out well …paying off with a horrific, but not arbitrary punchline which stresses the brutishness and brevity of life in this world.  Here, even the death of a best friend means a fresh cut of meat on the table and the shoving of the remainder of the corpse in a wheelie-bin.

Without words, a cast of familiar actors – including Oram’s Sightseers partner Alice Lowe – manage to be extraordinarily expressive, whether gibbering like loons or capering like apes.  With Wheatley – whose Rook Films was involved in the production - also adapting J.G. Ballard’s High-Rise, in which the denizens of a tower block revert to savagery, there’s a sense that AAAAAAAAH! might be a humorous footnote to the more elaborate film.

The joke here is not that these characters have devolved from civilisation but that they act the way they always have, as if this were a Mike Leigh or Shane Meadows movie bereft of articulate speech where the cast have to convey the same degree of contempt for and social embarrassment with each other through broad expressions and violent (often vile) actions.

In its enthusiasm for poo-flinging, food-fights, penis-chewing, cannibalism, tea-bagging and sudden stabbings, the film sets out to shock in a particularly cosy way – it’s as endearing as it is upsetting.