‘After A Revolution’: IDFA Review 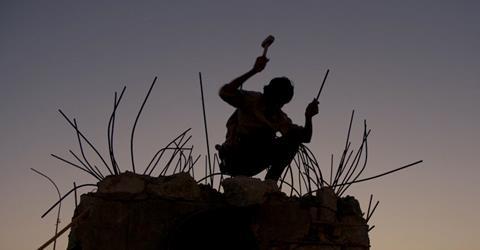 The turbulent relationship between two fiery siblings is the focus of Giovanni Buccomino’s debut feature documentary After A Revolution, an intermittently involving if taxingly heavy-handed chronicle of Libya’s war-torn post-Gadaffi years. Supported by some heavyweight organisations (including the Sundance Institute and Field of Vision), this Italian/Libyan co-production will doubtless obtain further festival following a high-profile bow in the main competition at IDFA. But while exposure seems secure, Buccomino sticks much too slavishly to prevailing trends in topical/political documentary cinema and high-end non-fiction television for his film to achieve much in the way of distinctive character.

When Buccomino allows their personalities time and space to develop, the film gains considerable impact.

This is a shame, because the two main protagonists are strong, compelling presences, similarly driven and determined but coping with adversity in fascinatingly different ways. This brother and sister chose opposing sides during the civil war which raged from March to October 2011: he supported Gaddafi’s loyal government forces, she was one of the rebels who eventually proved victorious. A rare (perhaps unique) example of a female fighter on the front lines during this conflict, the sister— a doctor, who took her ’nom de guerre’ from her favoured machine gun — attracted global attention, including a profile in the New York Times.

The aftermath of the rebel victory yielded shattering disillusionment for her, however, eventually causing her to switch sides and align with her brother. This change of heart would prove problematic for her subsequent attempted career as a politician; the film follows her electoral disappointment, and observes her bouncing back to eventually become a respected public spokesperson on women’s issues.

But while the woman seems to bloom in the face of difficulty, resistance and rejection, her hotheaded brother cuts a more tormented and raddled figure, frequently succumbing to substance abuse and displaying symptoms of PTSD. A much-recognised figure on the streets on his home town Beni Walid, he becomes fixated on building a roadside shrine with his bare hands — this controversial construction (criticised as idolatrous by the area’s hardline Muslims) taking shape in the film’s second hour and putting Haroun very much back in the line of fire.

It’s only in these latter stretches that After A Revolution finally clicks into proper narrative gear. The film’s problems are partly structural: the years are clearly passing, but — despite numerous expository intertitles along the way — we’ve never quite sure how many, or what is going on in the wider Libyan political landscape. Buccomino, previously responsible for 2010’s 66-minute mid-lengther Valley Of The Moon, alternates in rote fashion between the sibliings’ stories, which occasionally intersect. And when he allows their personalities time and space to develop, the film gains considerable impact.

But too often he inserts himself into the equation by means of attention-grabbing directorial flourishes, impressionistic editing touches (brief flashes cheesily purport to indicate what’s going through individuals’ minds at particularly frenetic or reflective moments) and hackneyed stylistic devices. These are most counter-productively notable in the sound design and FX area which Buccomino ill-advisedly handles himself. He is particularly fond of the “tinnitus trope” in which the soundtrack is muffled, distorted and temporarily replaced by a piercing high-pitched note, typically used in mainstream narrative cinema to convey the sonic impact of explosions.

Such ploys blatantly ape Hollywood action thrillers in an attempt to amp up the effect of material which is quite robust enough to sustain interest without this kind of bell-and-whistle adornment. The score by Polish composer Jacaszek is likewise disappointingly conventional, underlying every unfortunate development with plangently sad piano notes, and with every scene of even minimal tension underscored with portentously doomy strings, creating the impression that Buccomino and company don’t trust their audiences to make proper emotional or intellectual engagement with their film.