'After The Screaming Stops': London Review 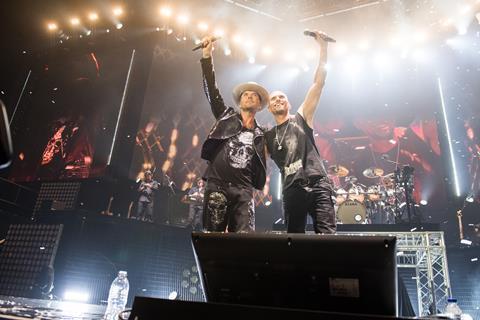 In the late 1980s, Bros were the hottest act in British pop. Sold-out concerts, top ten chart hits and the undying devotion of screaming, swooning fans, dubbed “Brosettes”, created hysteria on a Beatles scale. Identical twin brothers Matt and Luke Goss called it a day in 1992 but the wounds of separation are still raw and bleeding in After The Screaming Stops.

The constant tension between the brothers is tragic

This documentary offers an access-all-areas pass during the countdown to the Bros reunion concert of 2,017 but it can’t help but focus on the toxic relationship between siblings who sometimes make Cain And Abel seem like the best of chums. Initial interest may rest with nostalgic fans but there is a bigger story here with a wider emotional reach which should make it a perfect candidate for a one-night-only screening release strategy (set for the UK on November 9) and healthy ancillary sales.

The title is taken from a question posed to the brothers by the late British television presenter Terry Wogan. What would become of them “after the screaming stops”? They found out rather sooner than either might have wished. In the afterglow of Bros, drummer Luke Goss moved to Los Angeles to pursue a busy acting career, making appearances in Blade 2, Hellboy 2 and many others. Singer and musician Matt Goss pursued a solo career, undertaking lengthy residencies at Las Vegas high spots including Caesars Palace.

The decision to reunite for an epic concert at the O2 arena in Britain appears to have been motivated by both professional pride and personal emotions. The ticking clock to the big day gives the film structure and momentum as archive footage of past triumphs is paired with confessional interviews. The brothers are generally interviewed separately against a dark backdrop, revealing all manner of insecurities.

Both feel that the British press never took them seriously or respected their success. Matt appears to be the most bruised and vulnerable, lamenting the distance between him and Luke. He also seems the most partial to whimsy and grandiose pronouncements with echoes of Eric Cantona or Steve Coogan character Alan Partridge. “You need to be on the same page, otherwise you don’t get to turn the page, “ he declares.

There is a Spinal Tap element to the tempers and tantrums. There is also a car-crash fascination to the rehearsals as every arrangement and note becomes a battlefield in which festering grievances are revisited and old resentments come rushing back to the surface. It sometimes seems as if they cannot bear to be in a room together

The question of whether the reunion concert will even happen seems a legitimate one as Luke grows frustrated that his viewpoint never seems to matter in any of the creative decisions and a tearful Matt fears imminent disaster. The film doesn’t shy away from the warts-and-all candour of their arguments. After The Screaming Stops is commendable for striving to be more than a conventional record of the comeback concert or a promotional tool for the large-scale Bros return that has not yet come to pass.

Haunted by past tragedies, including the deaths of their sister and mother, the constant tension between the brothers is tragic. The fraught road to a tentative reconciliation is moving, and what makes this film more than just another concert documentary.