A mother butts heads with her pregnant daughter 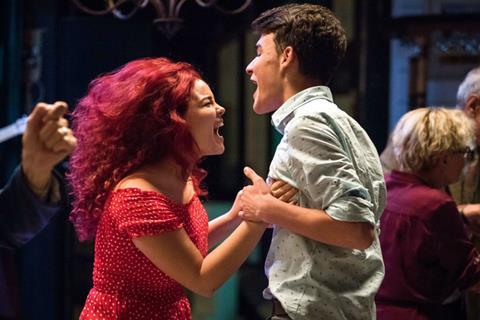 The constant state of war between a spectacularly stroppy teenage girl and her exasperated mother is vividly captured in Alice T. Strong characterisations and dramatic confrontations sustain a film that underlines director Radu Muntean’s ability to mine the fierce drama in everyday lives. Festival play should be extensive for a film that does little to soften the central figure or the impact of her behaviour.

Alice T. is deeply rooted in character and the flaws and contradictions that make people human

Andra Guti plays Alice to the hilt. Just 16, she is every parent’s nightmare; sullen, manipulative and all too eager to prove her wild child credentials. Her cascading, blazing red locks are just one sign of someone desperate for attention and always looking for trouble.

School is threatening to expel Alice and her mother Bogdana (Mihaela Sirbu) has reached the end of her tether. The conflict between mother and child (shades of Xavier Dolan’s Mommy) makes Bogdana seems more like a jailer than a parent.

The possibility of a thaw arises when Alice is forced to confess that she is pregnant. The bombshell is all the more ironic for Bogdana because she could never have children and decided to adopt Alice. Alice’s decision to keep the baby lulls Bogdana into the belief that the responsibility might just be the making of her. Relations start to improve but can Alice be trusted, can a leopard ever change her spots? “ You don’t shower without me telling you to, so how can you raise a baby, “ ponders Bogdana.

Alice is a whirlwind of a character; someone who breezes through life showing little concern for the consequences of her actions or the chaos she leaves in her wake. Guti never falters as her character tells the most blatant lies, bullies others and acts as if life is one big party, even when reality starts to bite. There is little that remains sympathetic about Alice, although there are just enough glimmers of vulnerability to ensure that we never quite condemn her as a lost cause.

Mihaela Sirbu matches her intensity as Bogdana, creating a mother who bridles when anyone else dares to voice criticisms of her daughter that she would undoubtedly share. She always takes Alice’s side, and there are some touching scenes at a family celebration and a shopping trip showing the genuine affection that exists between mother and daughter.

Alice T. is deeply rooted in character and the flaws and contradictions that make people human. Muntean may once again be collaborating with cinematographer Tudor Lucaciu and editor Alexandru Radu but Alice T. seems to mark a break from the minimalist, anguished work that has become a trademark of his and the Romanian New Wave. This feels more dynamic even if the camera work remains often static and unflinching as it observes the heated conversations and confessions.