A sequel to the prequel, this Alien instalment sees the return of Michael Fassbender in dual roles. 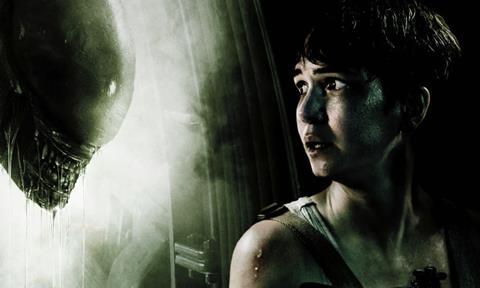 In space, nobody has seen an Alien movie: they have no idea what happens next.  Down on Earth, however, we’re on the sixth: and it’s all too familiar. Directed - like its immediate prequel Prometheus and the original Alien - by Ridley Scott, Covenant raids its own trope cupboard, recycling plot points like the exhausted air in a ship that’s spent too long in deep space.

It’s a long, flat, no-frills journey which struggles to engage despite its bloody shocks.

Although it will be of considerable interest to devoted fans, Alien: Covenant feels like a creative hull-breach in this series. It may further the narrative which commenced in 2012’s ambitious Prometheus, bringing us closer to the events of 1979’s Alien, but it’s a long, flat, no-frills journey which struggles to engage despite its many bloody shocks. Launching on May 12 in the UK and one week later in the US, Covenant docks in a busy month, between Guardians of the Galaxy 2, King Arthur and Pirates of the Caribbean. Its scuttling, bloodthirsty HR Giger-designed Xenomorphs should facehug onto a strong opening weekend, pleasing devotees with their back-to-basics gore. It seems unlikely to colonise new audiences, however.

Shot entirely in Australia and New Zealand, and mostly on Fox soundstages, Covenant expends a great deal of its creative energies on star Michael Fassbender, playing dual roles. He’s David, the synth who featured in Prometheus, and also David’s “brother” Walter, a later-generation model on board the Covenant ship which is taking 2,000 pilgrims to settle in a new outpost on the far side of the galaxy a decade after the events of the last film.

Covenant starts with a prologue featuring David in conversation with his creator/father Peter Weyland (Guy Pearce). John Logan and Dante Harper’s script then moves quickly to Walter, who is manning the Covenant when a fire forces the occupants to abruptly emerge from their stasis. While Prometheus may have divided Alien fans, Fassbender’s eerily-blank, Lawrence of Arabia-loving android was easily equal to the memory left by Ian Holm as the original synth. Thus Scott has doubled up: we see emotional David, and now Walter, who has been engineered into submissiveness.

So fascinated is Covenant by the potential of Fassbender in a dual role, that this plot point – revealed as being crucial to the overall Alien story arc – overshadows the rest of the cast, or, at least, its human members. The Covenant’s captain (played by James Franco in a brief video flashback) is immediately immolated inside his hypersleep chamber, leaving his religious second-in-command Oram (Billy Crudup) to take over the ship with his widow, Daniels (Katherine Waterston) as first officer.  The rest of the crew are placeholders, future hosts for the predatory Xenomorphs we know will soon make an appearance. There’s a nod to a gay couple, but it barely registers.

Visuals, thanks to DoP Dariusz Wolski, are low-key but insistent – neon tubes, sterile rooms, industrial corridors, a stock-issue flightdeck – when the crew starts to receive phantom messages from a nearby, hitherto-uncharted planet which appears to be habitable. Alien franchise veterans should feel the same unease as feisty Daniels when Oram decides to divert the ship there: they may even confuse her for Sigourney Weaver’s Warrant Office Ripley, given she’s wearing the same outfits and mouthing similar dialogue.

But Oram persists, docking a smaller exploration vessel on this beautiful, but uninhabited planet, which boasts a ruined structure which keen-eyed viewers may recognise. He’s even happy for his wife (Carmen Ejogo) to take a botanical side-trip, but as viewers aren’t particularly invested in her character – or any other crew member on the Covenant - it’s just a matter of waiting for the Xenomorphs to rip her apart, something that’s signalled by her cheery ““I’m going to stop here – pick me up on your way back!”.

The hope for something more substantial to feed on lies with David/Walter, as Covenant proceeds to lay waste to the team in increasingly squelchy, nasty ways - nobody survives a Xenomorph infestation, after all. The surprises here come mainly through the inventiveness of the Alien: Covenant’s superb creature-effects team.

The opening sequence between Walter and his creator refers to the gods entering Valhalla in Wagner’s Das Rheingold, and notes the ruined empire depicted in Shelley’s Ozymandias (“Look on my Works, ye Mighty, and despair”). David’s ambitions are immense, as indicated in the vaultingly ambitious Prometheus, which tracked the very origins of mankind, as well as its potential ruin. Covenant reins all that back in. Yet as time has gone by, Ridley Scott’s preoccupation with artificial intelligence has increased, and the pivotal David/Walter imbroglio all but reduces the Xenmorphs to a glutinous sideshow, bringing with it strong memories of similar synth-on-synth scenes from Blade Runner.

Production values are not ostensibly lavish given the size of this film, or the scope of Prometheus. Soundstage work involving the pro forma Xenomorph pods has a pea-soupy air, while the ship interiors are surprisingly generic. Space, however, resounds aurally and visually. Katherine Waterston (daughter of Sam, incidentally) made a strong impression last year in Fantastic Beasts and Where To Find Them; leading off this francise in a role so clearly intended to replicate Ripley she demonstrates again her versatility and presence. We’ll have to wait for the next instalment, however, to see if she survives to face off against a more accomplished scenario.