'All We Had': Tribeca Review 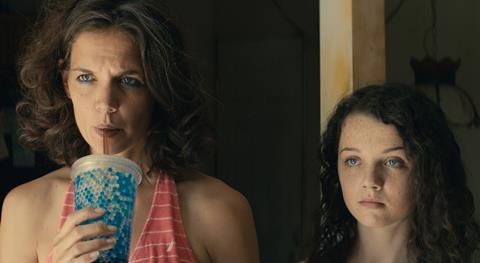 An itinerant mother and daughter live hand to mouth in a man’s world in All We Had. Katie Holmes’s directorial debut is a drive-by coming-of-age story that meets the American heartland when the getaway car breaks down. A film directed by Katie Holmes (and produced by Tribeca co-founder Jane Rosenthal) is a curiosity, and in this case a competent curiosity - no less competent than most of the independent films out there. And the story of a homeless duo on the edge of society also takes on the issue of poverty in America, which is overwhelmingly female. Holmes’s debut will get plenty of attention when it opens, and may find a home at festivals worldwide if Holmes comes along in person.

We meet Rita (Holmes) and daughter Ruthie (Stefania Owen), 15, as they are fleeing a boyfriend’s house. After shoplifting food and aspirin, they persuade a local diner to feed them. Their car fails before they can drive away without paying.

But compassion prevails, even for those petty grifters, and they find themselves working in Tiny’s, the diner where generous Marty (Richard Kind) gives them jobs and world-wise trans waitress Peter Pam (Eve Lindley) gives them advice. The small town cafe becomes the stage for Holmes’s mother-daughter drama in the America of low pay and house foreclosures.

The town’s best and worst citizens pass through, and men are attracted to the vulnerable but scheming Rita. There is even one with noble motives, a dentist (Luke Wilson), whom Rita encounters again at meetings of Alcoholics Anonymous. Be prepared for scenes seem like loving product placements for AA.

As in the Oprah-endorsed novel by Annie Weatherwax (2014), adapted by Josh Boone and Jill Killington, there’s a running voice-over where young Ruthie reflects on poverty and on Rita’s credulity and mishaps with men. The plight of women at the mercy of males is at the core of this drama. There are also distinct echoes from Mermaids (1990), the mother-daughter tale in which Winona Ryder, also 15, opined in a wry voice-over on the perils of mother Cher in a world where men held the money and made the rules.

Rita’s world is filled with booze and bartered sex, and Holmes, believable as a desperate mother, shows what raising a child is like when you’re stealing meals, pulling out your own teeth, and finding men to house you.

In those moments, the aptly titled All We Had gives us something fresh and fittingly uncomfortable. Holmes is well-served by her cinematographer, Brett Pawlak, who elbows into the cramped bedrooms and gas station bathrooms where Rita and Ruthie wash and dress, giving their life of scarcity an urgent look. In close-ups of the pair sleeping or awaiting chances to steal, he also finds a dignity that few would have imagined in those settings.

The film is not always well-served by its script, which moves from unique glimpses of family crisis to an off-the-rack procedural unfolding of mother-daughter tensions, weepy reconciliations and the promise of empowerment. There’s also a bracketing device, between scenes, where the camera looks upward through the leaves, as if to say, “what do I do now?”  The audience will ask the same question during marathon mother and daughter fights.

As Ruthie, Stefania Owen looks as if she could be Holmes’s daughter, and the two exploit that uncanny resemblance to tempestuous effect. Mark Consuelos is disturbingly smarmy as Vic, a real estate agent who courts Rita, makes the impoverished woman a homeowner, and then disappears as she loses her house. Eve Lindley as the truth-telling waitress in Tiny’s diner plays to type as a victim of small-town prejudice.

Without giving too much away, the ending of All We Had is not as dark or desperate as life must be for most women living in poverty. Critical scrutiny has never hurt Holmes’s career. It still won’t, now that she’s a director.