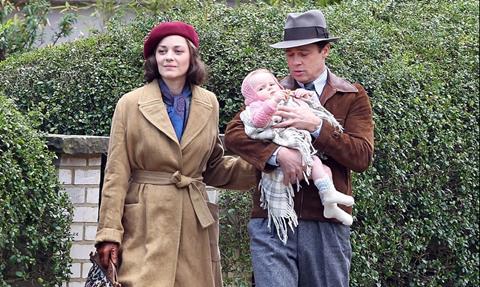 If you fell in love with a spy, could you ever truly trust her? That question drives Allied, a World War II romance-thriller that starts off smartly but sputters to an underwhelming finale. There’s palpable chemistry between Brad Pitt and Marion Cotillard, and director Robert Zemeckis exhibits a cool confidence as he executes this knowingly old-fashioned espionage drama. But once suspicion is raised about the seemingly happy spy couple, Allied struggles to fully capture the paranoia and uncertainty that can eat away at even the most stable relationships.

For most of its running time, Allied’s smooth, professional polish provides rewarding, albeit undemanding pleasures

Opening in North America on November 23 and the UK two days later, this Paramount release features big names but, also, a whiff of scandal because of Pitt’s recent divorce and rumours suggesting that he had an affair with his Allied co-star, a charge Cotillard has forcefully denied. Tabloid gossip will no doubt raise Allied’s profile, and sturdy grosses seem assured.

When Max (Pitt) and Marianne (Cotillard) first meet, it’s in Casablanca in 1942 as they pose as a married French couple. But they are actually spies for the Resistance who are plotting to assassinate a German ambassador. Their dangerous mission proves successful and, along the way, Max and Marianne fall for one another, impetuously marrying and moving to London to start a family. But after the birth of their first child, Max receives upsetting information from British intelligence: Marianne has been working as a German spy the entire time she has known Max.

With a skilful script from Steven Knight (writer-director of Locke), Allied is a film that can be divided into thirds. In the first section, Max and Marianne go undercover in Casablanca, the sexual tension between these spies undeniable. The movie then segues from taut action-thriller to a portrait of wartime domesticity as the newlyweds adjust to their life in London. And then in the final third, Max lays a trap for Marianne to see if she is, indeed, working for the Nazis, while at the same time doing some investigating of his own.

Allied’s first two-thirds are its sharpest, Zemeckis craftily ramping up the suspense before audaciously shifting tones once they get married. Cotillard’s enigmatic beauty and Pitt’s suave handsomeness make them swoon-worthy spies who can’t resist their electric attraction. Zemeckis consummates their growing passion with a sex scene inside a parked car during a sandstorm that, although amply aided by special effects, is one of the director’s more accomplished set pieces.

However, the film eventually starts to resemble Zemeckis’ What Lies Beneath, his 2000 horror-thriller that, like Allied, concerned the growing distrust that festers between a married couple. Here, British intelligence’s suspicions about Marianne shocks Max, who initially can’t believe it but, slowly, begins to see his wife in a new light, suddenly afraid that she has deceived him all along.

Because Cotillard’s coy eyes and inscrutable smile often hint at dark secrets, it’s understandable that Max will find himself questioning the validity of their love affair. And Allied nicely illustrates how doubt can poison a relationship. He starts acting differently around her, and she begins to notice, concerned about why he has suddenly cooled.

Unfortunately, this potentially rich plot twist paints Allied into a predictable corner. Essentially, once we’re given the information that Marianne might be a double agent, there are only three possible resolutions: She is a spy, she isn’t a spy, or there’s a crazy revelation around the corner. Zemeckis doesn’t so much toy with the audience as simply shift back and forth on Marianne’s innocence, jerking the viewer around in a way that’s more manipulative than it is indicative of Max’s wavering faith in her innocence.

Still, Jared Harris and Simon McBurney are excellent as fellow spies who elevate their characters to pungent WWII archetypes. And Joanna Johnston’s costumes are gorgeous, turning Max and Marianne into impossibly dapper undercover agents. For most of its running time, Allied’s smooth, professional polish provides rewarding, albeit undemanding pleasures. So it’s a shame that the film’s finale, in which Marianne’s past is finally explained, is so anticlimactic, going out on minor-chord melancholy that doesn’t entirely feel earned. Before then, though, Allied does a decent job bringing life to an old truism: all is fair in love and war.