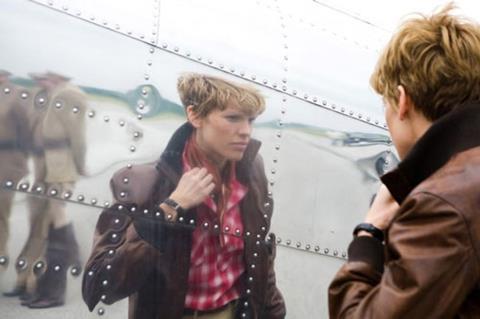 Two-time Academy Award winner Hilary Swank can’t give any lift to Amelia, a soggy, un-engaging biopic of Amelia Earhart, the American aviatrix who rose to fame with her transatlantic flights in the 1930s but disappeared in a later attempt to circumnavigate the globe. An attractively packaged but dramatically inert hagiography, the film feels so utterly designed not to offend, shock or confuse any potential age group that it ends up saying nothing of consequence about its subject.

Swank’s performance is committed, but her rural accent is distractingly hit-and-miss

Swank’s status as an Oscar darling could give the movie some inroads with audiences hungry for an adult drama, but apart from 2002’s Insomnia she’s never had a film crack $12.5 million in its first week of wide release. Additionally, lackluster critical response and tepid at best word-of-mouth should consign Amelia to a quick theatrical run and longer life on pay cable and the small screen.

Providing just a pinch of flashback context from her childhood roots in rural Kansas, Amelia mostly centers on Earhart’s passion for flight and the two men in her life: her husband, promoter and publishing magnate George Putnam (Richard Gere), and pilot Gene Vidal (Ewan McGregor), a longtime friend and, though the movie scarcely acknowledges it, part-time lover.

Charting her first transatlantic flight, her later solo trek and eventual doomed final flight, the movie also touches on Earhart’s place on the lecture circuit, and the hurdles involved in raising enough capital to fund her expeditions.

Amelia’s most comparable forebears are small screen, American cable movies-of-the-week and PBS docs, because its drama feels so staid and safe. Replete with newspaper headline montages that frequently explain the action that has just taken place in the preceding scene, Ron Bass and Anna Hamilton Phelan’s screenplay takes an extraordinary life of adventure and celebrity and drains it of excitement. There are no nuances to Earhart’s character, no hint that she might have been complicit in the marketing schemes dreamed up by George.

A meeting with Earhart and First Lady Eleanor Roosevelt (Cherry Jones), meanwhile, is so poorly set up as to render it a Forrest Gump-style outtake - the accidental meeting of two figures of historical note.

Most problematic, though, is the film’s obsessive preoccupation with attempting to impress a doomed love affair, a la Titanic, onto the narrative. In addition to creating one of the most tepid love triangles in recent movie history, all the time spent dawdling here could have more instructively been used to dig into Earhart’s personality or anchor the many fuzzy details that mar the doomed quest represented in the finale.

Swank’s performance is committed, but her rural accent is distractingly hit-and-miss and, combined with physical signifiers (toothy grins of gumption, furrowed brows of worry), it starts to come across as one-note, and cornpone at that. Gere and McGregor are admittedly given very little on the page with which to work, but each trades in three alternating looks: doleful, vexed or smitten.

Almost across the board, the movie scores high marks technically. Cinematographer Stuart Dryburgh crafts some striking work, albeit abetted by visual effects tweaks. The movie’s costumes and production design, though obviously crafted with some financial constraints, are attractive and engaging. The glaring exception: composer Gabriel Yared’s score trades in conventional melodramatic cues.

Ron Bass and Anna Hamilton Phelan, based on the books East to the Dawn by Susan Butler and The Sound of Wings by Mary S. Lovell