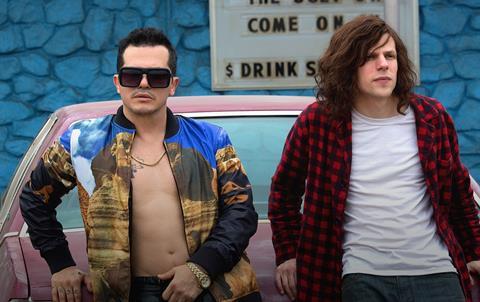 “Jason Bourne with a bong” isn’t a perfect description of American Ultra — the movie’s pothead main character prefers rolling a joint — but it hints at the stylistic cross-pollination going on in this idiosyncratic, restless, ultimately undercooked concoction. Part stoner comedy, midnight movie, outsiders’ love story and ultraviolent B-movie, this intriguing film is given real soul by stars Jesse Eisenberg and Kristen Stewart, even if director Nima Nourizadeh’s ambitions end up being more laudable than the results.

Nourizadeh and Landis have merrily thrown a lot of genres and tones into a blender just to see what comes out.

Opening August 21 in the US and September 4 in the UK, American Ultra is a prototypical low-stakes, late-summer release. This action-comedy has enough familiar genre components to suggest broad appeal, but lacks the easy accessibility and big names that would make it a commercial sure-thing. Eisenberg has critical clout thanks to The Social Network and was part of 2013’s Now You See Me, and Stewart has a bevy of fans because of the Twilight franchise. But the betting is that American Ultra will fall through the cracks, too defiantly strange for mainstream audiences to really embrace. Cult status might beckon, though.

Set over the course of three days in small-town West Virginia, the film stars Eisenberg as Mike, a sensitive stoner desperately in love with his girlfriend Phoebe (Stewart), who works for a bail bondsman. Meek with a nervous personality — he can’t get on planes due to panic attacks — Mike is stunned to discover, while being attacked by two muggers, that he can fight with incredible skill, killing his assailants with balletic, savage grace. He soon learns that he was once part of a secret CIA assassin program — and now, one of the CIA’s rising young agents, Adrian Yates (Topher Grace), wants him killed to erase all traces of the failed operation.

Nourizadeh’s feature debut was 2012’s Project X, an R-rated, calculatedly outrageous found-footage teen comedy about a blowout house party. American Ultra has its share of rude humour, too, but it’s an altogether more involving work, suggesting some of Edgar Wright’s hyper-vibrant élan mixed with the gritty aesthetic of a graphic novel. Written by Max Landis (Chronicle), American Ultra borrows the central premise of the Bourne franchise — seemingly ordinary guy learns he’s actually a formidable killing machine — and uses it as a springboard for stylistic excursions that seek to merge the government conspiracy thriller with the lovers-on-the-run melodrama.

What’s agreeably volatile about the film is that Nourizadeh and Landis are both tongue-in-cheek and sincere in their portrayal of Mike and Phoebe’s moony relationship. While the early moments of American Ultra set the viewer up to believe that the movie will be an earnest tale of dead-end lovebirds, soon the tone shifts and the action and comedy are ramped up, sweet-natured Mike’s realisation that he’s a badass assassin resulting in several amusing moments. American Ultra acknowledges how ludicrous — and derivative — its hook is, and yet the film demonstrates a fetching commitment to taking its conceit just seriously enough so that there can be some unexpected emotional moments in between the shoot-‘em-ups and jokes, especially when Mike discovers a second surprise that further upends his reality.

Eisenberg doesn’t quite convince as a pothead bum who spends his time working at a convenience store drawing comics. In the young actor’s best roles, his natural intelligence and slightly chilly demeanour dominate, and so he struggles to pull off Mike’s laidback, screw-up charm, although he has no problem articulating the character’s general anxiety and devotion to Phoebe. Stewart, reunited with Eisenberg for the first time since 2009’s Adventureland, again displays a warm rapport with her co-star. She has less to do than Eisenberg, at least initially, but American Ultra’s twists require her eventually to reveal other sides of Phoebe’s personality, which the actress manages effortlessly.

When Nourizadeh focuses on his lovers, American Ultra is a fizzy, disposable diversion — unfortunately, too much of the story revolves around Adrian and his relentless desire to find and kill Mike. This involves him squaring off with Mike’s old CIA handler Lasseter (Connie Britton) and her spineless colleague (Tony Hale), but Grace never makes his villain role particularly funny, playing Adrian mostly as a droning shouter whose smug one-liners are all duds. While the film’s action scenes are mostly strong, the intrigue concerning Mike’s previous life — which he doesn’t remember — and Lasseter’s attempts to rescue Mike from the elite CIA killers sent to eliminate him tend to gum up the proceedings rather than add extra levels of suspense.

Consequently, American Ultra is best in small spurts: a scene where Mike considers proposing to Phoebe at the worst possible occasion; an unexpected heartfelt exchange between Mike and the CIA’s best assassin (Walton Goggins); an expert action set piece in the middle of a Walmart-like superstore. The violence can be startlingly bloody — sometimes hilariously so — and often the stoner humour gets tedious, especially when John Leguizamo shows up to play Mike’s stereotypically whacked-out drug dealer. But the lasting impression that comes from watching American Ultra is a sense that Nourizadeh and Landis have merrily thrown a lot of genres and tones into a blender just to see what comes out. This cinematic beverage isn’t particularly good, but it certainly has some kick.