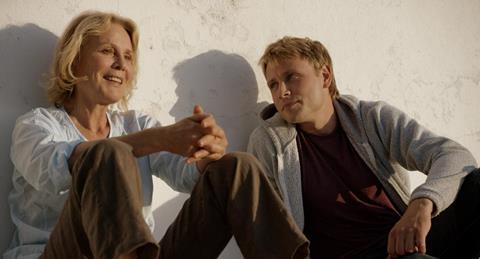 Amnesia is the name of a famous Ibiza nightclub; it’s also, in Barbet Schroeder’s new film, a reference to Germany’s collective post-war memory loss. Yoking the two together must have seemed like a good idea on paper, but this plodding drama, centring on the friendship between a young German DJ and an ageing expatriate, never shakes the dust off the pages.

It may be the first European film to be shot on 6K digital, but Amnesia doesn’t exactly look cutting edge

The fact that the film is a return to the Mediterranean island that featured in Schroeder’s cult 1969 hippy-era debut film, More – a restored version of which is also playing in Cannes – will attract some attention from hardcore cineastes, but otherwise Amnesia will have a tough job gaining much traction in cinemas. Forty-somethings expecting to be taken back to a misspent youth of Ibiza all-nighters will be disappointed: though it’s set in 1990, at the height of Balearic beat’s popularity, the music is never more than an occasional backdrop, and the ecstasy-fuelled club scene has been sanitised for general audiences.

There is apparently a great deal of Schroeder’s mother in the character of Martha (Keller), a 70-year-old exile from her native land who lives in an idyllic white villa just above the rocky coastline, with no electricity. She refuses to speak German, drive German cars or drink German wine. When a shy friendship begins to blossom with Jo (Riemelt), her young, clean-scrubbed DJ neighbour, she keeps her nationality a secret and they speak in English (though it’s odd that someone who works with sound would be so deaf to her accent). Jo mixes dance tapes, and his ambition is to land a booking at Amnesia, then one of the island’s top venues and the incubator of the Balearic sound.

An unplayed cello and an old black-and-white photo in Martha’s spartan villa drop heavy hints about her own buried musical talent – not the only skeleton in the closet that will be paraded in the film’s final third, where long but rather static and talky dramatic stand-offs contrast with the minor-key emotional build-ups and siesta-like pace of the first hour. Small conflicts are seeded via minor characters, but mostly there’s little to disturb Jo’s increasing, and largely unexplained, fascination with this mysterious, slightly acerbic older woman.

There’s even a timid attempt to throw thematic bridges between Jo’s mixtapes and the way Germans edited their stories of the war – a lesson that is embodied rather didactically in the character of Jo’s grandfather, played gamely by Bruno Ganz. But the third-act revelations in Amnesia are too theatrical and too randomly connected to the setting to make this a remotely convincing dark-soul-of-Germany parable. There’s more to hold onto in the cross-generational relationship at the heart of the film, which (largely thanks to convincing performances from the two leads) clears the improbability hurdle and comes across, in the end, as oddly touching.