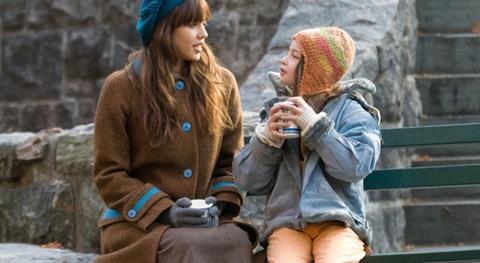 A soupy, entirely unconvincing grab bag of unmotivated behaviours and unearned emotional payoffs, An Invisible Sign feels chiefly like part of some woebegone, misguided stab at indie credibility and image adjustment for star Jessica Alba, who sports infantilising pigtails and playacts vaguely emotionally retarded throughout. A risible, nonsensical effort that tries to meld occupationally oriented coming-of-age drama with an emotionally stunted romance, the film collapses early on under the weight of yawning plotting and laboured eccentricity.

Several recent independent films, including Matthew Lillard’s Spooner and Hugh Dancy and Rose Byrne’s Adam, have to varying degrees of success tried to mine this seam of wounded-soul/mentally askew romance, though none have particularly punched through in the commercial marketplace, and neither will this ill-considered entry.

Receiving only a halfhearted theatrical release, An Invisible Sign will quickly and deservedly disappear from theaters, before baffling completist fans of its star when it hits home video and ancillary markets.

Alba stars as Mona Gray, a college dropout who exhibits obsessive-compulsive traits centered around numbers, and clings to her relationship to her parents (John Shea and Sonia Braga), mostly since her father is sick with some mysterious illness. Forced to move out by her mom, Mona lands a job taking over for her old math teacher and next-door neighbour, Mr. Jones (JK Simmons).

At school, Mona bonds with one of her new students, Lisa (Sophie Nyweide), because her mother is suffering from eye cancer. She also attracts the attention of the scruffy, charming science teacher, Ben Smith (Chris Messina). Intercut throughout all this are scenes of a young Mona (Bailee Madison), and her alternate embrace and rejection of the depressive Mr. Jones.

An Invisible Sign is based upon a book, so one presumes its gaps in reason are filled in with some character detail in the source material. Such shading is entirely absent in this adaption, in which seemingly anything can happen. In the classroom, Mona punishes some students, but is cowed by others, which conveniently serves the plot.

Of course, it’s also entirely irrational that Ben would be romantically drawn to Mona’s uncommunicativeness. Finally, the care-giving instincts of Mona’s mother are woefully negligent if her husband and daughter are as troubled as the story sometimes seems to suggest.

In her first narrative feature effort, director Marilyn Agrelo (Mad Hot Ballroom) shows no trace of storytelling skill, as her film flails from one scene to another with neither any accumulated tension or particularly compelling throughline.

Crucially, the illness of Mona’s father — purportedly something physical since he is shown collapsing, but also less than terminal, since the only after-effects are an arbitrary collection of markers of mental deterioration and half-sketched paranoia — is never adequately explained. This leaves a gaping hole in the film where an informed sense of Mona’s character development should be.

Technical credits are only average across the board, with the exception of an interestingly rendered, whimsical three-minute animated opening, which represents a story told to Mona by her father when she was a child.

If Alba delivers a walled-off performance full of unexplained tics, at least the affably charismatic Messina connects in fitful fashion — though mostly because he seems to embody a growing exasperation with Mona that the audience feels, in parallel fashion, with the movie as a whole.