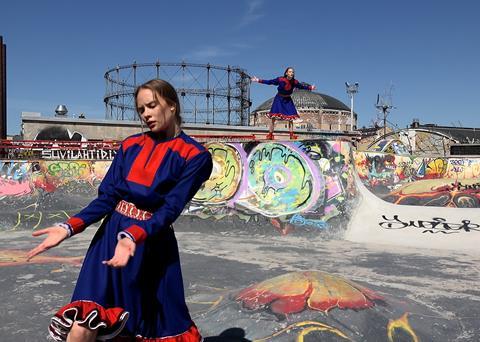 Working with his son Johannes, veteran Finnish director (and former forester) Markku Lehmuskallio revisits once again the subject that has consumed both his fiction and documentary work since his feature debut in 1980: the lives of the indigenous people of the Arctic Circle. In this lyrical collage of cultural artefacts, rituals and creation, the filmmakers are seeking what they describe as a ‘vital breath’ of the communities they document, peoples whose lands have been divided by arbitrary borders in the US, Canada, Greenland, Norway, Sweden, Denmark, Finland and Russia. It’s an ethnographic approach which, while sidestepping overtly political statements, acknowledges the mounting pressures facing those who would prefer to live according to the rhythms and traditions of their ancestors.

In a particularly poignant section, a Russian Nganasan woman regrets bitterly the “fatal mistake” of encouraging her people to leave their nomadic existence to settle in villages.

Not so much a documentary as an attempt to connect with the soul of each of the cultures it visits, the film has a kinship with several of Lehmuskallio’s previous films, in particular those he co-directed with his wife Anastasia Lapsui (Seven Songs From The Tundra, Mothers Of Life). It should prove to be an attractive addition to any festival or event programme seeking to focus on indigenous cultures and arts, although outside that sphere it might struggle to assert itself.

The film adopts a mixture of approaches. It’s partly an oral history – community elders explain to the camera the resonance and meaning of their traditions. A Russian Chukchi woman explores her culture’s now lost custom of facial tattooing for women; an indigenous Greenlander explains the significance of the colours in the ‘masked dance’ which she performs on a patch of wasteland next to a busy thoroughfare. A narration adds historical context, listing the dates of the first encounters with white explorers seeking trading posts and resources, the shipping out missionaries and cultural and religious pressures. But perhaps more effective is the layered scrapbook approach to the arts and music of each culture. The filmmakers find through-lines which they trace between peoples separated by oceans and continents but linked by a shared connection to the natural world they inhabit.

Drums – taut moons of animal skin – beat out a rhythm that accompanies dances and chants; bird imagery is ubiquitous, both in the haul of paintings and carvings that the camera scours, but also in the immersive footage of the forests and steppes that are home to the communities.

Sound is creatively used – layers of bird and animal calls are embroidered into the traditional songs and poems; collisions with the aural assault of urban life and industry are disconcerting. More harmonic is the way that other music – rap, folk and excerpts from works by Arvo Part and Henryk Gorecki – is woven into a kind of sound tapestry.

Through the art, dance and music of, among others, the Yupik of Alaska, the Haida of Canada, the Selkups, Nenets and Nganasans of Russia and the Sami of Scandinavia, the film pieces together an account of peoples connected physically and spiritually to the land, who don’t do so well when the attachment is broken.

In a particularly poignant section, a Russian Nganasan woman who served as the local Communist party secretary regrets bitterly the “fatal mistake” of encouraging her people to leave their nomadic existence to settle in villages. The camera pans across the buckling wood of abandoned sledges, groaning under the weight of the traditional reindeer hide boots and jackets that the village women now try to hawk as souvenirs to passers-by, including the filmmakers.

Part of the International Feature Film Competition, ‘Anerca, Breath of Life’ plays in www.visionsdureel.ch between April 25 and May 2