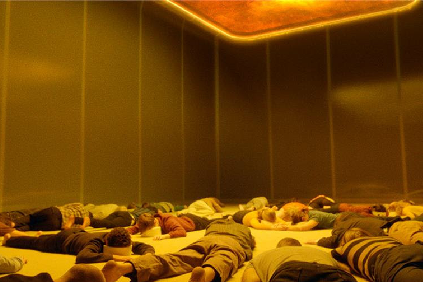 This is arresting,  frequently unsettling, cinema

Adapted from a 1956 epic poem by Swedish Nobel Laureate Harry Martinson, it follows the progress of the Aniara, one of many transport spaceships ferrying the population of a now scorched Earth to a new home on Mars. When the ship is knocked off course, and the passengers gradually realise that there is no chance of returning, society on the ship gradually disintegrates. The bleak warning of this environmental parable notwithstanding, this is arresting, frequently unsettling, cinema.

The film is divided into chapters, each heralded by a title which tells us how long since the catastrophic event which knocked the Aniara off course. Hour 1 shows the incident itself – a collision with a fragment of space debris which causes a critical failure and means that the crew has to jettison the fuel. Turning the craft back towards Mars is impossible. Their best hope is to use the gravitational force of a planet to swing back towards their destination.

When the accident happens, MR (Emelie Jonsson) is working with the Mima, a sentient computer which uses the memories of human participants to create a personally-tailored semi-spiritual hallucination of earth before it was devastated. Before the crash, the passengers are indifferent, prefering to trawl through the huge shopping mall. But after the incident, MR soon notices that the Mima becomes more popular with a community looking for solace, particularly as it becomes clear that the change of pinballing off another planet is slim.

There is a cost, however – the Mima takes on the horror of the memories of the humans that use it. It is corrupted and destroyed by the overuse of the passengers, in a melancholy echo of the fate of the planet it evoked.

This capsule sample of humanity under stress demonstrates all the manifold failings of the species. Power corrupts the Captain, who is increasingly a law unto himself. He punishes MR for the death of Mima, as much to assuage the angry mob than in any real belief in her culpability. Later, as desperation eats at the very heart of the ship, passengers form quasi religious cults with orgiastic rituals involving body paint, chanting and group sex.

MR, the most fully drawn character, represents the absolute best of humankind. She is empathetic, inventive, optimistic and seems immune to the voracious consumerism which infects the other passengers. But even so, as conditions deteriorate, her spark is extinguished. The loss of her lover and their child is the final straw. Other characters tend towards archetypes, in line with the film’s allegorical approach to its message.

In terms of design – both production and sound – this is a remarkable achievement. CG rendering of space and and the outside of the vessel is impressive. But it’s the inside of this floating metal box, shown over a time frame that spans 5981407 years, which is horribly convincing. This is not a film which will have audience dancing out of the cinema in a bubble of feelgood escapism. But as an environmental cri de cœur, it is timely and chastening viewing.