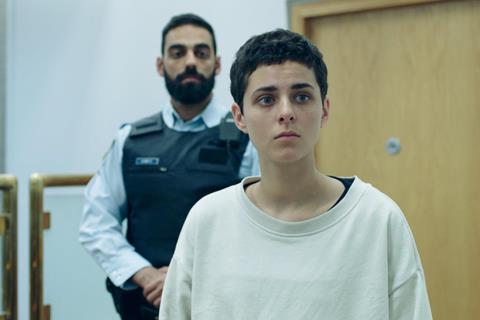 Sophocles Greek tragedy is provocatively transposed to 21st century Montreal in Antigone. Writer/director Sophie Deraspe’s loose adaptation retains a fascination with the ties and responsibilities of family, but also develops into a timely reflection on the refugee experience. An ambitious, wide-ranging drama destined to appeal to serious-minded audiences, Antigone’s international profile will be raised by its selection as Canada’s Oscar candidate and by the award for best Canadian feature at TIFF.

Antigone Hipponome(Nahema Ricci) is first seen against a stark backdrop as she is held in custody and processed into the legal system. Flashbacks capture a portrait of a loving, close-knit family and a school presentation in which Antigone recounts her history. Algerian by birth, she moved to Canada aged three following the death of her parents. She now lives with her grandmother Meni (Rachida Oussaada), brothers Eteocles (Hakim Brahimi) and Polynice (Rawad El-Zein), and her sister Ismene (Nour Belkhiria).

Antigone is presented to us as a studious, hard-working teenager with ambitions for the future. She is also someone who has never forgotten her roots and is very much the responsible adult intent on keeping the family together. When Eteocles is mistakenly gunned down by the police, and Polynice is arrested for gang connections, the callous attitudes of the authorities feels like an affirmation of the family’s outsider status. It is seen as especially telling that nobody in the family has applied for citizenship and all of them are “merely” permanent residents.

Polynice’s record as a repeat offender makes him especially vulnerable to the full force of the law. Antigone is prepared to take desperate measures to keep him safe and embarks on a course of action that places her at odds with the state and the judiciary.

In many respects, this 21st century Antigone is a story of radicalisation born out of fierce love and family loyalty. The naive Antigone is physically and emotionally transformed throughout the film; cropping her hair lends her the look of Joan Of Arc. Her attitude grows cynical, her mood is defiant as she feels betrayed by an uncaring society and a country whose tolerance only runs skin deep.

Deraspe uses the story of one individual to explore a hefty agenda from poverty, inequality of opportunity and racism to the true colours of a society that seems to set immigrants up to fail and then punish them when that happens. The changes in style are equally dramatic – as Antigone becomes a symbol of injustice there are dream sequences and energetic mixed media montages of campaigns to “Free Antigone” sculpted in spilt screen and fast edits, and set to rap music.

The film moves from conventional courtroom drama towards a theatrical intensity and, as it slips the moorings of social realism, an edge of hysteria takes hold, and it becomes less persuasive and more pretentious. Yet Antigone is still a meaty, thought-provoking drama and although Nahema Ricci seems a shade too old for the role, she gives a gutsy, committed interpretation of Antigone’s journey from hope to disillusion.