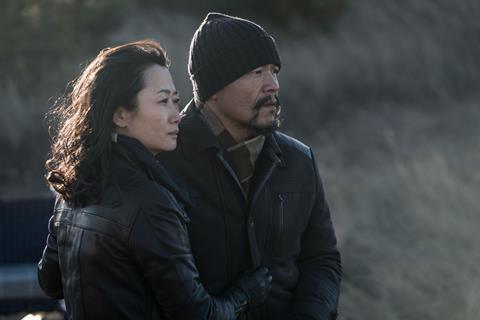 Jolting, seismic shifts in 21st century Chinese society are viewed through the bittersweet ebb and flow of an epic love story in Ash Is Purest White. The latest state of the nation report from Jia Zhang-Ke gives the viewer plenty to chew over and is suffused with a mournful melancholy. A thoughtful, measured piece that lacks the anger and intensity of his earlier work, it should attract the same level of interest as the more ambitious Mountains May Depart.

There are many similarities with Mountains in terms of its time span, structure and focus on the way that individuals reflect the wider currents within their country. There is also further evidence of the director’s fondness for Village People standards, with the haunting use of Go West in Mountains now joined by the prominence of YMCA on this soundtrack.

Ash Is Purest White begins in 2001 in Shanxi, a mining town in north-west China that is threatened with the prospect of becoming a ghost town. We are introduced to the formidable Qiao (Zhao Tao), a woman with the personality of a hardboiled saloon keeper in a Hollywood Western. She administers a hefty thump on the back to men she considers friends and greets her lover, local mobster Bin (Liao Fan) with a playful bite.

When Bin’s car is stopped by a gang of young bikers and he is severely beaten, it is Qiao who intervenes, firing off an illegal gun. She claims ownership of the firearm and is sentenced to five years imprisonment.

When she is released in 2006, she goes in search of Bin, expecting to resume their life and assuming that things can just go back to the way they were. She is to discover that nothing stays the same and that there is no going back.

The themes of Ash Is Purest White are constantly restated as it grapples with the process of change, what is lost along the way and the price paid by those who survive. In their happiest times together, Bin advises Qiao to “ enjoy the moment”, and that could be the film’s wisest counsel.

The meandering narrative sprawls like a great Dickens novel but individual encounters and elements that may seem like distractions all reflect back on the greater themes. Trains become faster and more efficient, technology advances, swathes of the population drift towards burgeoning cities the size of small countries but values are eroded and certainties sacrificed.

Bin, Qiao and their brotherhood may have been on the margins of society but they chose to live by a certain code. The couple seem decent and honourable  but such virtues are a luxury in a society that now operates on the basis of dog eat dog. The clash between traditional values and modern attitudes plays out over the years between 2001 and the cusp of 2018, in the Three Gorges area on the Yangtze River and then back in Shanxi.

Jia Zhangke’s first collaboration with cinematographer Eric Gautier results in a film that is rich in atmosphere. Both men have an eye for faces and places. The film’s earliest scenes use footage that the director shot in 2001 of ordinary people on a bus; stoical, lost in thought, oblivious to what might lie ahead. Gautier captures a real sense of place, from the muddy ground near a rainswept power station to the snow blanketed courtyard of the prison where Qiao is incarcerated. People are made to seem like ants as they proceed up a vast set of stairs. A river cruise traverses in area in which planned developments mean that everything will soon be underwater.

Jia Zhang Ke has suggested the film in some way reflects a sense of his lost youth, and there is a palpable feel of nostalgia and even an uncharacteristic underlying sentimentality.  He has created a fantastic showcase for the skills of his wife Zhao Tao whose character is the film’s purest spirit, seeking to recreate something that has already vanished and can never be again. The march of change is reflected in a poignant performance that shows the emotional wear and tear on a character who remains true to what she wants, even as it seems less and less likely that she will achieve it.