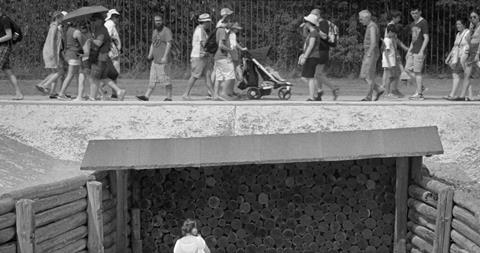 Marx said, “History repeats itself, first as tragedy, then as farce.” The disquieting theme of Sergei Loznitsa’s Austerlitz is that in our epoch, history – no matter how tragic – tends to repeat itself as tourism.

Currently continuing the documentary work that made his name, most recently in Maidan and last year’s archive film The Event, Ukrainean director Loznitsa – also known for fiction films My Joy and In the Fog – offers a sobering vision of how even a World War Two concentration camp can essentially become a theme park, leaving the realities of history and suffering obscured rather than available for understanding. This fascinating but demanding slow burner could equally find a place in serious TV arts slots and on the gallery circuit; it has limited theatrical potential but it natural talking-point programming for festivals.

The film, shot by Loznitsa and Jesse Mazuch in black and white, begins with a shot of people sitting on benches behind a row of trees; eventually we see others walking around in shorts and T-shirts, some with listening devices at their ears, mooching in leisurely fashion in a leafy outdoor space, clearly enjoying a pleasant summer’s day out. It’s only a couple of shots later, as we see the motto on an iron gate – ‘ARBEIT MACHT FREI’ – that the penny drops. These people are visiting a former concentration camp, Sachsenhausen in Germany.

As the crowd pours in through the front gate, many stop to take photos, including the obligatory selfies: even a death factory is caught up in the logic of “Been there. Seen that. Done that.”

In a series of extended takes, all fixed shots from a camera that appears to be hidden – it’s mostly if not wholly unnoticed by subjects - Loznitsa and Mazuch record the drift of various groups and individuals around the camp, who generally come across like stereotypical tourists rather than respectful pilgrims to a site of horrifying human and historic importance.

The mostly young visitors traipse around generally looking unimpressed, or unaware of where they are, as if the camp is just another stop between the Louvre and the Tower of Pisa. Decorum isn’t the order of the day: they laugh, smile, gobble sandwiches, pose for sometimes inappropriate photo ops. They aren’t exactly dressed for the occasion: shorts, baseball caps and brashly logoed T-shirts predominate. The densely crammed wide shots give us freedom to seize on striking details: it’s hard not to be struck by the incongruity of someone wearing a Jurassic Park T-shirt to a death camp.

The film’s title, according to Loznitsa, is an allusion to W.G. Sebald’s novel-essay Austerlitz, in which the name carries echoes of Auschwitz; perhaps the suggestion is that the visitors don’t really know where they are, and think they’re in another camp whose name they can’t pronounce. The allusion is also to the Paris railway station Austerlitz; certainly this space feels a lot like a busy transport hub. Each shot tells its own story, sometimes emphasizing the sheer saturation of the ‘traffic’, sometimes allowing us to concentrate on specific people passing through individual spaces – an enclosed yard, a bathroom.

Key to the film’s approach, as in Maidan, is a complex sound design (the sound is by Vladimir Golovnitski, with mixing by Ivo Heger). Individual noises are highlighted in the mix: hence, a constant background chorus of clicking and bleeping cameras, along with footsteps, wind sounds, creaking doors, blithely chattering voices. At key points, the voices of tour guides are foregrounded – their texts read by credited voice performers – delivering information about the camp’s history, and the atrocities that took place there.

The immediate message we recieve is that the logic of tourism blinds us to history and blocks our empathy. Certainly little reverence or even decorum is on view; the very fact of making this site accessible robs it of its terrible aura, and the sites we are used to seeing as ineffably dreadful in Holocaust images become places like any other: a corridor is just a corridor, a bathroom is just a bathroom.

It’s hard also, as crowds pour in through the front gate, not to think of the masses who once entered this place, similarly processed though far more radically dehumanised. Loznitsa suggests that tourism too dehumanises and debases. But perhaps the film is also implicitly cautioning us: if we are too quick to dismiss these people as an ignorant mass, we are guilty of the same sort of thinking that informed the Holocaust, seeing only an indifferent collectivity, not the living individuals that comprise it; and after all, Loznitsa is only showing us ourselves.

When a group of boisterous, smiling teenagers emerges at the end of the film, you can’t help being thinking that we’re actually seeing bustling, vital humanity, which is a merciful note to end on.