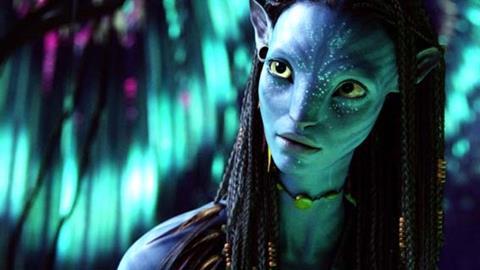 12 years after Titanic, James Cameron delivers his latest blockbuster and once again takes cinema to a new level of remarkable spectacle. An epic film born entirely of Cameron’s imagination, Avatar uses tailor-made technology to create the most astonishing visual effects yet seen on screen and blends them seamlessly into a mythical sci-fi story about an ancient alien civilisation fighting the encroaching human menace. It’s an unprecedented marriage of technology and storytelling which is on the whole remarkably successful.

Cameron’s legendary attention to detail is of course in evidence

Although Fox and Cameron showcased 20 minutes of footage earlier this year, audiences will still be astonished by the gigantic sci-fi tapestry that the film-maker has woven here in crisp and striking 3D images. Avatar should see large figures on opening December 18, but business will also be sustained over subsequent weeks as word of mouth spreads.

Could it hit Titanic numbers? Probably not, as Avatar is more of a boy’s own adventure, lacking the DiCaprio factor which so obsessed teenage girls back in 1998. It does have its own zeitgeist feel, however, with the visual wow factor augmented by its resonant contemporary themes (environmental destruction, war and corporate corruption) in the context of a sci-fi adventure story. And if that’s not enough, it features a love affair between two blue-skinned aliens which is surprisingly romantic and affecting.

Fox has a lot riding on the film which it says cost $237m to produce and $150m to release. It should recoup that, and unlike Titanic, where it brought in Paramount to co-finance, Fox has no distribution pot to share, although the studio has financial partners in Dune Capital Management and Ingenious Film Partners. International revenues should dwarf domestic, as happened on Titanic, and, in acknowledgment of the film’s global prospects, the world premiere took place in London on Dec 10.

Avatar will also benefit from higher priced tickets at 3D theatres and IMAX screens, not to mention the added boost it could get from awards recognition.

The story is an amalgam of numerous well-worn genres and inspirations – the western, the Pocahantas story, The Last Of The Mohicans, Cameron’s own The Abyss, Star Wars, Dances With Wolves and more. Cameron’s characterisations and dialogue are often crude and cliched, as Titanic demonstrated, although Avatar’s hackneyed dialogue feels more appropriate to the adventure genre he is tackling.

Taking place in 2154, the film follows a wheelchair-bound US marine called Jake Scully (Worthington) who wakes up from six years of cryogenic sleep on the distant planet of Pandora, where a large corporation is mining a powerful mineral that could help solve the earth’s energy crisis.

He has been recruited as a “driver”, a human whose consciousness is linked to an avatar. This remotely controlled biological body is a genetically engineered hybrid of human DNA and DNA from the Pandora natives, 10-foot-tall blue humanoid creatures called Na’vi.

Jake is charged with infiltrating the Na’vi and learning their ways in order to persuade them to cooperate with the mining operation. This happens sooner than he expected when his life is saved by a Na’vi female called Neytiri (Saldana), and he is taken in by her clan. But he soon learns to love the culture and values of the Na’vi, who have a magical connection to the forest they live in. As the human forces start to move in and seize the minerals, Jake finds himself torn between two bodies and two loyalties.

The motion capture technique which Cameron pioneered with Weta Digital is extraordinary, and the expressiveness of the Na’vi, as based on full body performances by Worthington, Saldana, Weaver and others, is immensely engaging. The technique moves film leaps and bounds beyond Gollum, King Kong or anything from the Robert Zemeckis canon with the result that Avatar’s digital characters are as compelling as any humans. Most of the Pandora sections are fully animated, yet it is frankly impossible to tell exactly what is and what isn’t while watching.

Cameron’s legendary attention to detail is of course in evidence, not just in the alien language designed for the film but in some of the frames so overstuffed with creatures, insects, colours and painterly compositions that they cannot be adequately appreciated on one viewing. Fox will be hoping, that, like Titanic, one visit to Avatar will not be enough for millions of cinemagoers around the world.