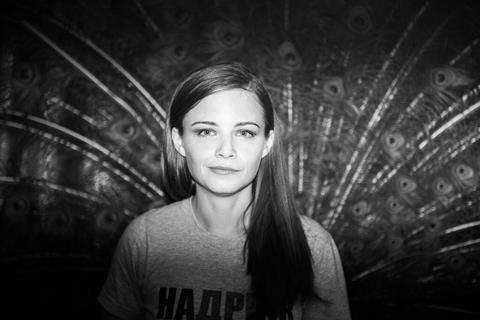 For her feature film debut, Helene Hegemann adapts her own controversial semi-autobiographical novel, titled Axolotl Roadkill, into a turbulent teen odyssey through Berlin’s hedonistic excesses. The amphibian of the film’s title features in a supporting role (born aloft, in a plastic bag, through a party) and as a fairly overt metaphor. Like Mifti (Jasna Fritzi Bauer) the teenage girl at the centre of the story, and most of the people around her, the axolotl never fully reaches maturity.

Mifti is not the easiest character with whom to sympathise.

Hegemann’s novel, written when she was just seventeen and drawing heavily on her own life for inspiration, was something of a critical sensation when it was published in 2010. Subsequently, accusations of plagiarism turned the literary establishment against her. Having weathered that storm and written another novel, it’s fair to say that Hegemann herself is a major selling point for this picture, particularly in territories where her writing – she is a playwright as well as a novelist – is widely known. Elsewhere, this youthful but somewhat unfocused picture should find festival berths. Less explicit and confrontational than the novel on which it is based, it could connect with the audience which responded to Eva Husson’s Bang Gang (A Modern Love Story).

Unanchored and reeling after the death of her mother, Mifti is living with siblings who struggle to control her (her sister) or struggle to care (her brother). Her self-absorbed father is too busy commissioning custom-made steel furniture and honing dinner party arguments about ‘terrorism as a career choice’ to provide his daughter with anything other than financial support. So Mifti drifts. With no friends her own age, she hangs out with a the kind of adults who think it’s ok to share their cocaine with a child.

Mifti becomes preoccupied with Alice (Arly Jover), a much older woman who exists on the criminal fringes of the city. Their relationship is sexual, but it’s clear that in Alice, Mifti is looking for a mother figure as well as a lover. Meanwhile Ophelia (Mavie Hörbiger), an actress with a voracious drug habit, takes Mifti on three-day clubbing binges. Hegemann favours a few too many slow motion shots of strobe-lit flicking hair and sultry cigarette puffing in the extended and slightly repetitive party scenes.

More interesting are the surreal visual motifs that pepper the film. A unicorn wanders through shot when a bruised and disoriented Mifti wakes up in a woodland glade. A sinuous camera tracks a dance sequence which punctuates a scene in which Ophelia has a drug-fuelled meltdown and later throws up in a shopping bag.

Mifti is not the easiest character with whom to sympathise. She is given to saying the the unsayable at exactly the wrong moment. Her throw-away comment, “Maybe we just needed a Fuhrer…” gets her expelled from the school she barely attends. More problematic, for audience engagement in the film at least, is the fact that Mifti is insouciant to the point of inertia. We don’t always feel persuaded by the emotional turmoil she is meant to be suffering. Chaotic lives can make for a muddled storyline, yet ultimately Hegemann allows her central character some kind of growth.