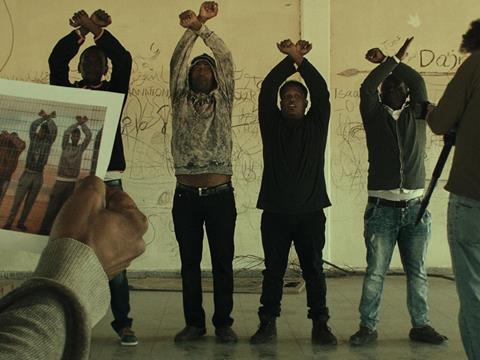 Generally considered the most fiercely independent of Israeli filmmakers, documentarist Avi Mograbi (Z32, Once I Entered the Garden) returns to dance over the aching toes of his country’s establishment and the guilty consciences of his fellow countrymen, this time for the way they treat the African refugees pouring in their country over the last decade. Mostly from Eritrea and Sudan, these refugees risk and often lose their lives in the search for shelter from the atrocities perpetrated in their own countries.

Mograbi’s film itches enough to make the complacent culprits in this case, not only in Israel but elsewhere, feel uncomfortable.

Given Mograbi’s reputation, Between Fences should find a safe niche in festivals and any other film events dealing with displaced populations, though his approach may appear irreverent and very much in contrast with the earnest and grim attitude employed by countless other documentarians dealing with this issue in recent years.

Shooting with a tiny crew on a minuscule budget - the best way to avoid undesired outside pressures of any kind - Mograbi worked for this film with stage director Chen Alon. Together, following the ideas perpetrated by the “Theatre of the Oppressed “, they went to Holot, an “open detention camp” in the south of the country originally created by Israel to hold the refugees for an indefinite period of time.  The idea was to put on a show in which the camp’s inmates were supposed not only to perform but also write their own lines describing their tribulations preceding their arrival in Israel and their present condition today.

The film’s first part acts as an introduction, a practically straightforward documentary on the state of refugees in Israel, or more accurately on their non-state, for there is no such legal status in that country. The action becomes engrossing once the rehearsals and the preparations for the show are underway. A number of young Israeli volunteers join in and everybody seems to enjoy themselves during the rehearsals. Most striking is the vivacity and high spirits of the inmates, conscious of their sad fate but never considering the option of giving up. As tragically grotesque as the events recounted can be, there is a sense of affirmative faith in life reconfirmed time and again by the attitude and personalities of the performers.

Mograbi is present, as usual, not only behind but on camera as well, although this time he contents himself with throwing in a few relevant suggestions as he holds up the microphone boom. While he never spells out in so many words his original intention, the show itself, including a scene in which the refugees play Israelis who shrink from the “black infiltrators and their brood”, stresses the absurd attitude of a nation made of refugees that dares look down upon these other refugees, to use the words of right wing politicians in power now, as a cancer in the flesh of the country.

The open ending and the many questions left without an answer, are  naturally a sine qua non condition for such a piece, for indeed, up until now, there have been no satisfactory solutions advanced anywhere by anyone to assuage the suffering of these people.

Nor does Mograbi pretend to offer anything of the kind, and the issue itself is certainly far too complex to find its answer in a documentary. Using the same kind of factual irony he has made his own in the past, his film, to a certain extent, will preach to the converted. Yet it itches enough to make the complacent culprits in this case, not only in Israel but elsewhere, feel uncomfortable.