'Blow It To Bits': Cannes Review 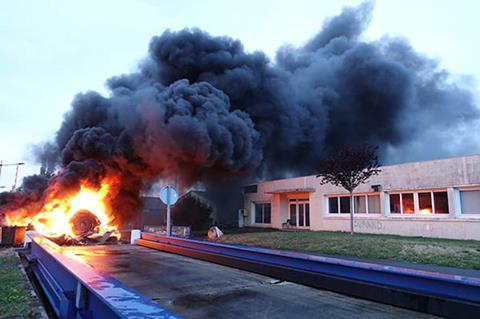 ‘Blow It To Bits’

This is a documentary feature which bears witness to the struggle of the factory workers at French car parts manufacturer GM&S when their jobs are threatened; it is also an attempt to use cinema as a form of activism in a fight which is still ongoing at the close of the picture. Fly on the-wall techniques capture the core group of workers whose threats to burn down the factory broaden to encompass pickets at French car plants, roadblocks and impromptu barbecues during the seven months that Kowalski spent shooting. Meanwhile, the director adds his own musings on the situation in a sparse narration. It’s a highly charged and thought provoking subject, but this is an exhausting watch. You feel the workers bristling with annoyance, understandably sick and tired of labouring the same points over and over again. The problem is that all but the most committed and sympathetic audiences might start to feel the same way.

If nothing else, this picture is a detailed case study of a protracted labour conflict and its effect on the workers and their community

Kowalski comes to this subject having made a career of documenting people and communities at odds with the mainstream – notably in D.O.A. about the Sex Pistols, Born To Lose on Johnny Thunders and Story Of A Junkie. His fluid camera insinuates itself into the frontlines and heated discussions – if nothing else, this picture is a detailed case study of a protracted labour conflict and its effect on the workers and their community. But whether this will find an audience outside France, where the story was reported in the news, is uncertain. There’s a looseness to the edit which can be rather energy sapping, even for those with the best will in the world towards the embattled workers, fighting for their right to a livelihood. Coming in the wake of films such as Pedro Pinho’s The Nothing Factory, which handled similar material with a bold degree of formal invention, and Stephane Brizé’s At War, Blow It To Bits might be limited to festival berths and use as a lobbying tool.

Kowalski came to the story when revisiting a similar incident from a decade before; he brought two key characters from that project (which was never cut into a film) to meet the GM&S workers. At that point, they were at an impasse and were setting light to tractor tyres, sending smoke signals of discontent to the rest of the country.

He started filming without telling the protesters that he intended to make a documentary and had been part of the press pack for a month before he revealed his plans to them. This works in his favour – there’s an anonymity to his camera, which darts between the men – and they are almost all men – as they debate the best course of action. As a filmmaker, Kowalski watches rather than engages with the characters. There are no formal interviews, but with patience, we start to learn about some of the men, although, with one exception, we only view them through the filter of their part in the protests. We could do with more scenes, perhaps, like the unexpected bonding between one of the protesters, a keen carp fisherman, and a policeman sent to quash their demonstration. Their brief chat about bait preferences and fishing kit across the barricades is a curiously moving moment of human connection, and a respite from all the finger-jabbing rhetoric elsewhere in the film.

Featuring: The workers of the GM&S factory