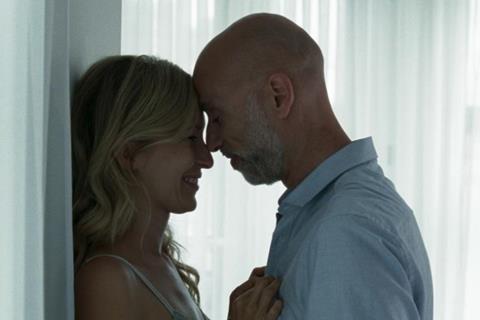 Denis Cote’s Boris Without Beatrice is correctly, if awkwardly-titled – the Canadian director’s eighth film is about Boris Malinovsky (James Hyndman), a well-to-do, proud Quebecois who is flailing in the wake of his wife Beatrice’s crippling depression when a God-like Denis Lavant appears to set him on the right path. There’s precious little Beatrice in here. Is Boris Without Beatrice all in Boris’s head? Or is this a man-opausal breakdown? Cote’s film is consistently interesting without making the self-involved Boris’s plight in any way compelling.

It’s not for everyone, admittedly, but Cote is a compelling visualist

Boris Without Beatrice is visually assured – almost aggressively so. When you combine Cote’s bold shots with Boris’s mid-life masculine assertiveness, it can threaten to stall a capricious, occasionally clichéd, narrative. It’s an achievement for Cote that Boris, despite his arrogance, womanising and overall patronising attitude, can remain even mildly sympathetic. Or the fact that the female characters are in the film specifically to service him through his male mid-life crisis.

That won’t be a universal opinion, however, and Boris faces into a mixed reaction after its Berlinale Competition premiere after which it should go into specialised distribution (the director’s last film, Vic + Flo Saw A Bear, which also competed in Berlin in 2013, is a benchmark). A cameo by Canadian porn’s Bruce LaBruce as the country’s prime minister may attract some attention.

The film stakes its ground from the arresting opening sequence. Boris, legs planted firmly in the grass, hips thrust out, stands in a field as a helicopter descends. Next, he’s in a fancy clothes store; a harpist strums as the supremely confident Boris belittles a sales assistant. Soon, he’s in his factory, telling the staff he cares little about that he’s taking a leave of absence.  (That’s apart from Helga, played by Dounia Sichov: Next stop, he’s banging his subordinate in a hotel room).

Thanks to Cote’s broad brush strokes, we get the picture clearly, even before Boris’s alienated teenage daughter Justine (Laetitia Isambert-Denis) arrives at his country house after slugging a cop, or he flirts with the young Russian carer Klara (Isolda Dychauk). while refusing to speak his native Russian with her. He doesn’t like Beatrice’s psychologist (Violaine Esterez), and there’s even a chilly distance between Boris and his mother (Louise Lapdrade). Boris – and make no mistake, the film is all about him - is messed up around women.

Just as well Denis Lavant is on hand as ‘the Stranger’ (a device used before by Cote), clad in a gold brocade Nehru jacket, to talk about hubris, Tantalus, and how ‘even the strong are brought to their knees’. This diminuitive God-like figure is giving Boris a chance, though, to put his life right.

Meanwhile, the beautiful, idolised, mute Beatrice (Simone Elise-Gerard), a former Government minister, floats around the house clad in a series of flowing nightgowns, screaming on cue.

It’s not for everyone, admittedly, but Cote is a compelling visualist. His silhouetted studies, deliberate, immobile stances and stilted interchanges hold a magnetism of their own. For all the dully-predictable shots of Boris driving fast cars or staring at an Egon Schiele, there are striking sequences set in antiseptic surroundings which hold the attention long past the point where the Boris’s plight has ceased to engage.