‘Cafe By The Highway’: Moscow Review 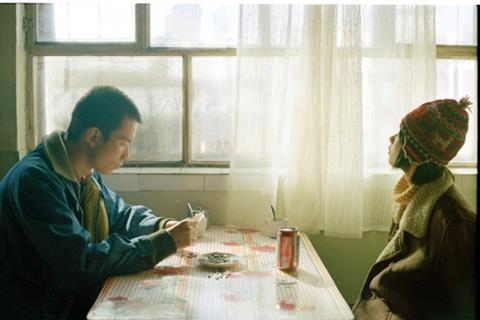 ‘Cafe By The Highway’

A young woman returns to her remote hometown in western China, having been scarred – both physically and emotionally – by her experience in Shanghai, and desperate to make peace with her father. A visiting Russian drives into the desert in search of a long-lost space capsule. The pair are connected, unexpectedly, by both dad and the spaceship.  The first feature by Chinese visual artist Shi Xiaofan is a perplexing animal: ambitious, gorgeous to look at, yet narratively and tonally awkward; while there are intimations of Jarmusch and Kaurismäki in some of its stylisation and characterisation, Shi hasn’t yet mastered those directors’ ability to eke humour out of the downbeat. But he clearly has talent, and something to say, and despite its dramatic failings Cafe By The Highway serves as a calling card.

For a time, the sheer style of the film offers promise

Han Yuanfang (Liu Yase) arrives in Baima, by bus in the dead of night, having spent three years as a barista in the big city and with burn marks across her neck due to an accident at work. Her father is out of town indefinitely, so Yuanfang’s principal reason for returning is put on hold. She gets a job as a highway tollbooth collector, working night shifts, where she meets two co-workers – the irreverent and embittered Dali (Michelle Kaszuba), who’s desperate to escape the town, and stuttering, introverted St. John (Wang Yijun), who appears to have no desire whatsoever. Poor Yuanfang soon wonders why she returned.

Meanwhile, her father Shizhong (Jiang Yongbo) is guiding the Russian, Andreev (Stepan Chernetskiy), into the Gobi, in the futile hope of finding the capsule of a cosmonaut who was forgotten and left in space long ago, his craft now thought to have fallen back to Earth. Ironically, while they’re scouring thousands of miles of desert, the capsule is sitting in a field by Baima’s tollbooth, serving as the nocturnal hideaway for the new friends there.

For a time, the sheer style of the film offers promise. The scenes in this virtual ghost town are beautifully shot, Shi and cinematographer Zhou Wencao either making hay with the magic hour or casting a dreamy haze over fabulously framed interiors. They also have fun with the capsule, which sits like a giant diver’s helmet in the middle of the field.  And there’s something touchingly sad in the set-up, with Yuanfang’s experience apparently reflecting the dilemma of young Chinese stuck between hometowns that offer nothing, and the big cities that spit them out.

Ultimately, though, the theme isn’t particularly well developed. Both of the storylines meander in circles, muddled and overly morose; their eventual dovetailing is perversely offhand and unsatisfying; a subplot involving a missing, likely murdered tollbooth girl feels like it belongs to a different film. While the lives it depicts are unresolved, that’s no excuse for the film itself to feel stuck in orbit.

Incidentally, the whimsical metaphor for the characters’ sense of limbo, or disenfranchisement, is seemingly drawn from urban myths and the actual experience of cosmonaut Sergei Krikalev, who was stranded for a time on the Mir space station when the Soviet Union collapsed in 1990 – the country that sent him into space no longer existing to bring him back.