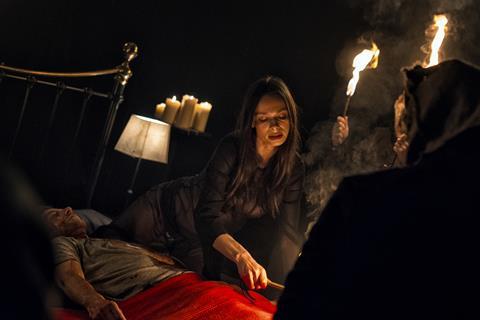 This relies too much on Satanic cliché, with tilted camera angles, wailing and buzzing music and odd lighting effects stirring up an atmosphere of dread which tips over too often into ridiculousness

While Cherry Tree, which opened the UK’s FrightFest, has some creepy performances – especially from wide-eyed, soft-voiced British scream-queen-in-the-making Anna Walton (Vampire Diary, Hellboy II, Soulmate, The Seasoning House) as the coven’s presiding witch – and nice use of cherry-squelching pagan imagery, the story is too familiar.  Given that it leaps from realistic teenage problems to supernatural botheration, its decision to be non-specific about the country in which it’s set – most characters have English accents but supermarket prices are in Euros – is odd, depriving the film of the gradual escalation from believable to unebelievable found in Wake Wood and such genre touchstones as The Witches and The Wicker Man.

Fifteen-year-old Faith (Naomi Battrick), a sulky blonde schoolgirl, has enough problems for a Ken Loach film – her chef father (Sam Hazeldine, excellent in a smallish, significant role) is dying of leukaemia, she’s pushed around at school by a gaggle of older girls, is fancied by nice guy Brian (Patrick Gibson) but can’t go out with him because her best friend (Minnie Phipps) likes him more, and tends to get violent on the hockey pitch.

Sissy (Walton), the new gym mistress, invites Faith (the character name is too on-the-nose) to a rambling old house with sinister décor and reveals that she’s the head of a coven with wide-ranging powers in the significantly-named small town (Orchard).  In the usual Rosemary’s Baby fashion, all manner of authority figures turn out to be Satanists — even the school bullies are apprentice witches, allowing for a nice ‘so you’re in this too’ moment.

Sissy offers a miracle cure for Faith’s father if she’ll carry to term a half-demon baby and then hand the child over without questioning why … and the girl goes along with it, sleeping with Brian on her sixteenth birthday and not even being grossed out when he transforms into a demon during sex.  Immediately, this hook-up makes Faith lose her best friend, but her big problem is the fast-growing imp incubating inside her and her worries that loopholes in the pact will lead to an unhappy ending for her and her loved ones.

It shares several themes and images with Bruce McDonald’s Hellions, which also screened at London’s FrightFest, but this tends to feel like the conventional version of the ambiguous-feelings-about-teenage-pregnancy-give-rise-to-demonic-persecution premise which Hellions takes in a weirder direction.  Nicely acted – with an array of interesting, calculating female characters and clueless male ones – this relies too much on Satanic cliché, with tilted camera angles, wailing and buzzing music and odd lighting effects stirring up an atmosphere of dread which tips over too often into ridiculousness.

Cherry Tree’s quieter moments, which boil down to Battrick and Walton staring significantly at each other, play better than the demon transformations and blood sacrifices.  The film has a darkly humorous coda at odds with the serious tone of the rest, but which at least ends the film on a decent shock.