‘Children Of The Night’: Busan Review 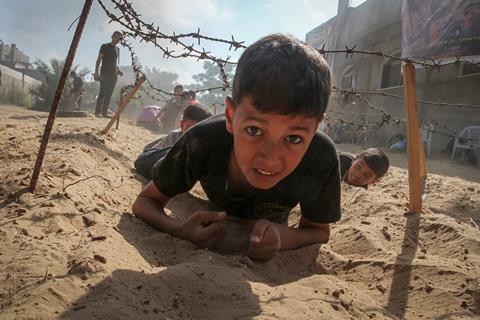 ’Children Of The Night’

In a refugee camp in Hatay, South East Turkey in 2017, a small gang of unaccompanied boys, aged between 13 and 15, have formed a de facto family. But these children, from Pakistan originally, are not just the victims of war — they are some of its most ruthless perpetrators, vulnerable kids weaponised by Daesh in madrassas which churn out “bombs of anger”. Through exceptional access and research, Behrouz Nouranipour’s chilling documentary paints a portrait of children conditioned to kill and asks the audience to find empathy for murderers who believe that pity is an unforgivable weakness.

These children live in a world of chaos and uncertainty, something which is deliberately reflected in the structure of the film, which can, at times, seem cluttered and confusing. The repeated use of crude animations to illustrate the process by which the children are indoctrinated is tonally jarring, and the theme might have been better explored through the use of more in-depth narration. But there is no denying the power of the footage captured at the camp. Children Of The Night is a profoundly uncomfortable watch but an important one, and the film should find berths in further festivals and human rights-themed events.

Under shredded canvas, with a tattered picture of a rhino pinned to the tent wall (it was inherited from a previous tenant), the boys talk about their first encounter with guns. There’s a kind of feverish one-upmanship — they talk of kissing the weapon, pressing it to their hearts, prostrating themselves before it. It’s the exaggerated teenage banter that you might hear in a discussion of computer gaming, but underscored by the stark fact that these kids use guns to kill ‘infidels’, rather than to blast zombies.

They talk of their killings with pride. One boy, a quiet kid with unblinking eyes behind his glasses, says that he is responsible for between 80 and 100 deaths, but lost count along the way. He recalls, in flat, expressionless tones, how he put thallium poison in the water-supply tank at a camp housing Yazidi refugees. “They were all heathens. I killed them all”. Written down, the words read like distilled evil. But the camera is drawn back to this boy time and again. And it seems likely that he is the most broken of all these damaged kids, a numb, traumatised child who can barely comprehend the questions that are asked of him. There’s a glimpse, towards the end, of the vulnerable little boy he once was. “Do you miss your mother?” he is asked (like all of the children, he is orphaned or abandoned). “No”, he answers. “Because my heart broke”.

More talkative is Balanch, the natural leader of the boys. The son of a heroin-addicted father who “went crazy because of poorness”, Balanch ran away from home to escape the fate of his brothers and sisters, who were deliberately crippled and sent out to beg. He aspires to start his own religious army, named Towbeh (Repentance). In the meantime, while he waits for orders from his ‘Commander’, he plays on the rubbish tip with the others. There’s a heartbreaking moment when they forget, for a few seconds, to be soldiers, and revert to being kids, mugging for pretend selfies with a broken phone case.

The question of what to do with these boys who have been programmed to believe nothing beyond hate looms large throughout Children Of The Night. And apart from a nameless aid worker, who cautions about the very real risk that they pose if released, there is little in the way of authoritative commentary. But even without an expert’s assessment, the future the film hints at for these children is not exactly full of hope. And a shot of younger kids — not more than four or five — playing with crude wooden weapons suggests that there will be no shortage of ”ideological manpower” for extremist groups in the future.