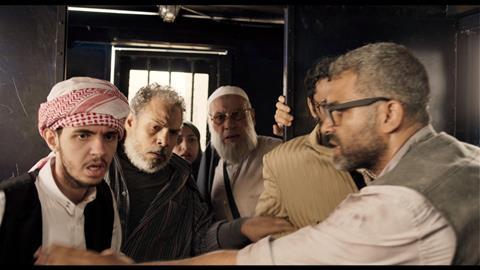 In an Egypt where the Arab Spring has soured into an autocratic autumn, Clash, which opened the Un Certain Regard section at Cannes, comes as a courageous cinematic challenge to the ongoing crackdown on press and artistic freedom. Filmmaker Mohamed Diab is as famous at home for his role as an activist and blogger during the 2011 revolution that toppled the Mubarak regime as he is as a director.

Clash is intensely cinematic, inventively using a handheld camera in a confined space as a mirror of a society with no room for manoeuvre.

In this follow-up to anti-sexism drama Cairo 678 (2010), Diab does not chart that time of hope, but instead turns his attention to the chaos and divisions of the pro- and anti-government protests that followed the toppling of elected Muslim Brotherhood president Mohamed Morsi in July 2013. Topical, watchable and only occasionally over-melodramatic, Clash should travel wherever there are audiences interested in getting beneath the skin of a complex Islamic nation.

There’s something a little theatrical, perhaps, in the premise, which sees the back of a police truck, where a pair of journalists and supporters of both sides are thrown pending arrest, as a pressure-cooker dramatic device and metaphor. But while the stand-off does have its scripted moments, Clash rises above this for two reasons. Firstly, it’s intensely cinematic, inventively using a handheld camera in a confined space to not only to stir tension but as a mirror of a society which itself has been ‘kettled’, with no room for manoeuvre. Secondly, underlying the drama is a rather poignant lament for the unity and energy of Egyptian culture, something which comes through in a wealth of small details.

Terse opening titles set the scene, fast-forwarding from the 2011 revolution to the July 2013 day on which the film is set. The camera begins where it ends. at the back of the police van during one of the Cairo protests that followed Morsi’s deposition by the military. The first to be rounded up by the riot police and thrown into the truck are Adam (Adel) and Zein (El Sebaey), a reporter and photographer working for Associated Press – a thinly veiled nod to the arrest of Australian Al Jazeera journalist Peter Greste with two local collegaues in December 2013.

When a group of anti-Morsi supporters stone the truck on learning that an American ‘spy’ is on board – one of the weaker plot stratagems – they too are thrown in the back; later, when the truck runs into an opposing Muslim Brotherhood protest on the way to the precinct, a pro-Morsi contingent joins the party. A Christian Copt policeman who rebels against orders and is himself locked up with his charges later adds another dramatic iron to the fire. Meanwhile, as temperatures soar, the police struggle to protect each other, let alone the increasingly desperate human cargo inside the truck.

Egyptian star Nelly Karim plays one of two women on board, a nurse who seems to hold out some small moral hope as she patches up injuries sustained by both sides. But her role is just one cog in a convincing ensemble cast that seems geared to run the gamut of types on both sides. Among the Islamists, there’s the pious intellectual leader, the hothead potential Isis recruit, the imam and his veiled teenage daughter, and an outsized wannabe singer and actor who provides some thankfully muted comic relief. On the other side, a blond-highlighted DJ, a down-and-out and an old man concerned that his teenage son may have defected to the opposition. There is no unity on either side, with the Muslim Brother leader insisting that card-carrying members stand in a different part of the van from mere hangers-on, and two friends on the anti-Morsi side falling out, predictably enough, because one is revealed to be dating the other’s sister.

Riots, sniper shootings, stonings and tear-gas clouds shot through the bars of the van’s windows, and the grilles that cover them, conveying the blinkered vision that still, the film seems to suggest, plagues Egyptian attempts to reach some sort of national consensus. Inside, fluid movements and focus-pulls create games of perspective as the drama changes gear repeatedly, ratcheting up the tension and releasing it. It’s during one of these moments that one character, reminiscing about the 2011 revolution, comments wistfully “those were the days!”. The silence that follows, on all sides, is eloquent, as what might have been pushes aside, for a moment, the chaos.