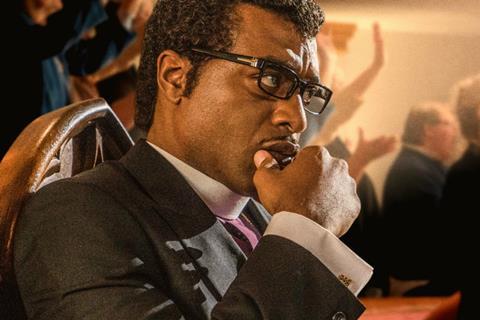 The burden, beauty and mystery of faith are explored movingly — if not always rivetingly — in Come Sunday, a reverential biopic elevated by Chiwetel Ejiofor’s textured performance as a minister questioning his lifelong conception of Heaven and Hell. Maria Full Of Grace filmmaker Joshua Marston has crafted a muted, thoughtful drama that wrestles with the role of religion in people’s lives, bringing together an empathetic acting ensemble that avoids theatrics and sermonizing. It may play a little flatly, but its sincerity of purpose remains affecting throughout.

Following its premiere at Sundance, this Netflix entry will begin streaming on April 13, accompanied by a limited theatrical release. Good reviews for Ejiofor will spur interest, as will a supporting cast that includes Jason Segel, Lakeith Stanfield and Martin Sheen. Come Sunday’s faith-based plot should appeal to religious viewers, although secular audiences might be intrigued as well.

Based on a segment of weekly radio show This American Life, the film tells the story of Bishop Carlton Pearson (Ejiofor), a beloved evangelical minister who, in the late 1990s, radically changed the message he preached to his flock. Believing that God has spoken to him, Pearson insists that people don’t need to accept Jesus to be saved and go to Heaven — in fact, God’s love has already guaranteed that everyone will enter through the Pearly Gates. Pearson’s controversial sermons spur an immediate outcry, especially from the influential evangelist leader Oral Roberts (Sheen), who’s Pearson’s mentor.

Those around Pearson start treating him like a heretic, but Come Sunday is studiously respectful — both of its protagonist’s new beliefs and of those who oppose him. While Marston and screenwriter Marcus Hinchey are clearly aligned with Pearson, advocating for his vision of a loving and forgiving God, the movie is less interested in championing one side in this debate than it is investigating how personal and passionate an individual’s faith can be.

Repeatedly, Pearson clashes with those once close to him — including Henry (Segel), his loyal partner in his church — but Marston frames these standoffs not as fire-and-brimstone showstoppers but, rather, hushed and anguished exchanges between men of conviction. What gives the film its dramatic pull is the fact that neither Pearson nor his critics know for sure what God wants — or, if any deity even exists — and the film deftly illustrates how such uncertainty impacts them. What if Pearson is right and his church has been preaching the wrong message all along? Or what if Pearson is wrong, dooming his congregation to eternal damnation by insisting they don’t need to accept Jesus? Such questions may seem academic or irrelevant depending on one’s own faith, but they matter greatly to these fervent Christians.

Ejiofor expertly conveys Pearson’s contradictions, presenting us with a charismatic minister who’s a natural performer but also has great humility when it comes to his relationship with God. There’s a genuine sense of struggle within Pearson, who is trying to reconcile a lifetime of preaching about the perils of Hell with his new beliefs. The Oscar-nominated actor wears that torment elegantly, and Pearson’s spiritual searching can be quite emotional.

Come Sunday’s existential ponderings about faith and the afterlife prove far more engaging than the film’s plotting and structure, which tend toward a bland earnestness. Marston’s honourably respectful tone can have the unfortunate side effect of reducing this story to a humdrum Job tale. Nonetheless, his cast brings understated feeling to the proceedings. Segel is quietly terrific as Pearson’s friend, who’s heartbroken that the minister has shifted his beliefs, and Stanfield shines as a religious gay man whose sexuality challenges Pearson’s still-conservative ideology.

But the movie tends to make all of its supporting characters interesting only insofar as they relate to Pearson’s inner crisis, which is especially true of Come Sunday’s depiction of his wife Gina (Condola Rashad), who’s utilized merely as a sounding board and opposing force for her husband. The movie dives deeply into Pearson — not so much his disciples.

Screenplay: Marcus Hinchey, based on a radio story from WBEZ’s This American Life reported by Russell Cobb and produced by Alex Blumberg