Elijah Wood stars in this pitch-black, tone-deaf comedy from the makers of ‘The Greasy Strangler’ 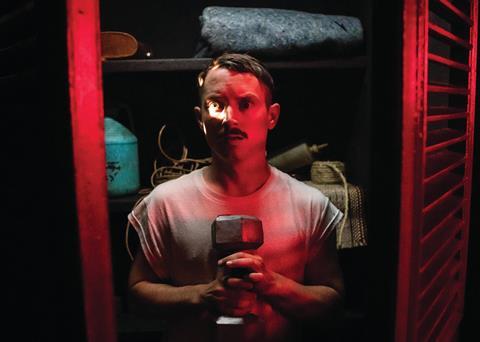 Featuring some literally toxic masculinity, Come to Daddy starts out like a nasty drama, ends up as a gruesomely gory, coldly comic revenge thriller – and desperately loses its way somewhere in-between. A follow-up from part of the team behind the cultish The Greasy Strangler, it boasts some increased production values, and a familiar face in Elijah Wood – but the childishly crude humor and gross-out violence remain the same. Premiering at the Tribeca Film Festival as part of its Midnight programming, Come To Daddy seems unlikely to break out of that I-dare-you-to-watch niche, although it could easily fill similar late-night slots at smaller festivals.

Directed by Ant Timpson, a producer of The Greasy Strangler, and scripted by that 2016 film’s co-writer Toby Harvard, it begins with a twitchy Wood playing Norval, who shows up at the remote Oregon home of the father who deserted him decades before. Dad (Stephen McHattie), it seems, wants to try to re-connect with dear little Norval. Except Dad often appears to be dangerously disconnected – drunken, aggressive and brimming with as much fond family feeling as Charles Manson. And then things get really weird, as the two men spin fast, faster and finally out of control. The movie soon follows.

That’s a shame because the story gets off to a good start. Wood has always been open to risks, and he takes some huge ones with Norval, wide-eyed as a lemur and just as out of place, a man-child hipster in gender-fluid costumes and the haircut of a 14th-century saint. And as Dad, the veteran Canadian actor McHattie delivers his increasingly obscene lines of invective with a gourmet’s relish, lingering over each vicious oath like a fine brandy. There’s no doubt, of course, that eventually the squirmy worm will turn, and Norval will prove to be anything but normal. But at least the idea of watching that slowly develop is sardonically promising.

But Harvard’s script starts to wander, introducing some unbelievable plotting and outrageously overwritten characters. An abrupt twist turns what seemed to be one sort of movie into something else. And suddenly we’re back in Greasy Strangler territory, with foul-mouthed caricatures and needlessly scatological humor, perverts in dirty T-shirts and people getting punctured with whatever sharp object is at hand. Things, and bones, get broken regularly, but first-time director Timpson stages the fights poorly, leaving important elements lost in murky shadows. There are occasional moments of disgust, but no real fear, or even tension.

Amidst this, some participants manage to hold onto their dignity. Although Timpson indulges Wood with too many actorly moments – a drunken phone conversation, some overripe monologues – McHattie is fine and fierce as the fiendish father. Indie stalwart Martin Donovan brings some very welcome underplaying to the project, and Michael Smiley turns up as a criminal so slack-jawed and sadistic he seems to have taken Fargo as a training manual. And unlike the deliberately shabby Strangler, at least Come To Daddy boasts a few impressive settings, including a cliff-side retreat that Norval rightly describes as looking like “a flying saucer from the ’60s.”

But while the house, indeed, looks like it could take off at any moment, it remains as earthbound as the film – which, while promising ripe family melodrama, quickly descends into faux sleaze and hip cynicism, a thriller without many thrills, a comedy without any jokes.