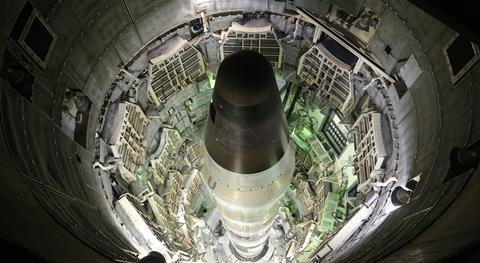 The weapons of mass destruction which pose the greatest threat to Americans could be nuclear bombs inside the United States. So suggests the chilling and prodigiously researched documentary, Command And Control, as it revisits a nuclear accident which took place decades ago in rural Arkansas.

This documentary is a terrifying disaster thriller

Robert Kenner’s film could scare a US public in an election year and connect with an audience outside the America that’s already concerned about whose finger at the White House might eventually be on the nuclear trigger. The film’s lessons about the dangers of simply possessing nuclear weapons – even if they are not fired in war or stolen by terrorists - gives the film a global educational market. It doesn’t take a rocket scientist to see that Command And Control is prime remake material. Cynics are probably already making jokes about a sequel.

Command And Control is structured around what at first seemed like an ordinary accident in 1980. A former Air Force officer tells of performing maintenance on a Titan II missile in the cow fields of lonely rural Damascus Arkansas, and dropping a wrench which fell 70 feet and punctured a hole in the fuselage, spewing out flammable fuel.

Staff, from workers to commanders, were unprepared, and the site eventually exploded, killing one airman and sending a nuclear warhead into farmland. The bomb, which contained more explosives than all the bombs dropped during World War II combined, including the two atomic missiles, never detonated – a miracle, according to experts. The Air Force command and top politicians who happened to be meeting nearby (including the then-governor Bill Clinton) claimed that there was never any danger of a nuclear explosion, which proved to be a lie. Low-ranking airmen and local commanders were punished, but the higher-ups were never held accountable.

Kenner (Food, Inc.), adapting the 2013 book of the same title by Eric Schlosser, who co-produced and co-wrote, created spooky re-enactments in an actual Titan silo, in which men in clunky space-suits (standard issue at the time) stumble through the emergency. Testimony from the airmen themselves reinforces the mood of helplessness and fatality.

Solaris and Kubrick’s 2001 come to mind as airmen accustomed to military routines confront a deadly unknown, with orders buzzing into their headsets from far away. The spectre of 9/11 also haunts the doc, as the men who were there, barely twenty at the time, describe the explosions that threw bus-sized chunks of concrete into the air.

The title Command And Control refers to the process by which an officer ensures that orders are carried out. Witnesses, now in their sixties, recall how nothing of the kind happened once a single wrench fell. Schlosser, who is also one of the  interviewees, warns that the possible is likely to become the inevitable. The Damascus accident was one of many, so many that the Air Force doesn’t report them. The US and the planet have been lucky, he says, “and the problem with luck is that it runs out.”

As we watch tense, throbbing re-enactments, we hear reflections from men whose remarkable bravery and judgment under fire provide some confidence in the people who operate missile sites. Yet the same men admit that their jobs depended on a willingness to exterminate another civilisation. “I was all right with that,” one them says.

Those men are shown to have been betrayed by their commanders. “Things just don’t work perfect all the time,” one of them says, with a deadpan Arkansas twang. Yet as we wait for the other wrench to drop, their story makes for a terrifying disaster thriller.