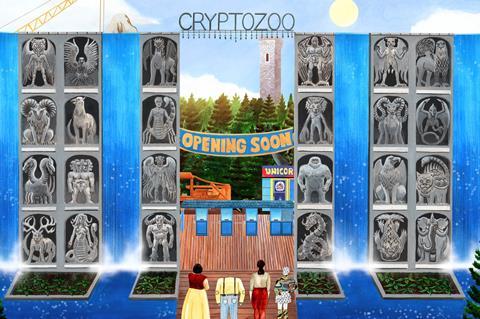 The latest animated feature from the team behind My Entire High School Sinking Into The Sea (2016) is a work of boundless imagination allied to a vibrant, kaleidoscope of rainbow-coloured imagery. There is cult potential in each eye-popping frame of Cryptozoo, an adventure yarn that folds the politics and attitudes of 1960s America into a bold, freewheeling fantasy.

Dash Shaw is credited as the writer and director of Cryptozoo which is billed as a film by Jane Samborski and Dan Shaw. Smaborski is the animation director responsible for the stunning array of styles, painstaking attention to detail and colourful backdrops that combine to provide a feast for the eyes.

The story is set in 1967 and has a prologue in which two blissed-out hippies, Amber (voiced by Louisa Krause) and Matthew (Michael Cera) climb a tall fence into a woodland compound where they strip and make love. Subsequent events have consequences that ripple through the remainder of the film as the narrative eventually circles back to the aftermath of their intrusion.

The lead character Lauren Grey (Lake Bell) is a square-jawed Lara Croft-style adventurer who travels the world in search of cryptids. A handy on-screen definition explains that cryptids are animals whose existence is disputed or unsubstantiated. This is a woman with a passion for fantastic beasts and she generally knows where to find them. Her latest obsession is a baku, a baby elephant-like creature which feeds on dreams and can be a force for good or evil.

Lauren’s allies include gorgon Phoebe (Angeliki Papoulia) and Joan, (Grace Zabriskie) the elderly founder of Cryptozoo which is a Jurassic Park-style theme park-cum-sanctuary for cryptids in Florida. Opposition comes from the brutal Nicholas (Thomas Jay Ryan) and the US military who want to capture the baku and use it to consume the utopian dreams of the counterculture movement. “Without dreams there is no future,” laments Joan.

Cryptozoo really embraces the culture of the 1960s and carries echoes of the civil rights movement, the counterculture era, Planet Of The Apes movies, the X-Men comicbooks and more. This is a society divided between those who protect the cryptids and those who persecute them, between integration and segregation, preaching hate or advocating love and understanding.

The plot has conventional elements but those pale beside the appeal of a menagerie of amazing creatures and phantasmagorical sights from unicorns to a kraken, mischievious Polish elves and black lights (’Luz Mala’) that can mesmerise any viewer. There is an appealing diversity of tone and style as pools of light highlight colour in an otherwise monochrome scene or backdrops to conversations explode with luminous colours and patterns.

Epic in scale, Cryptozoo is a cliffhanging adventure yarn in the manner of a Spielberg or Fritz Lang, a fantasy that might have been penned by Ursula K. LeGuin or Edgar Rice Burroughs with animation that ranges from Hokusai-like drawings to the delicacy of Lotte Reiniger. In this dazzling collage, you feel there is an affinity with Rene Laloux’s Fantastic Planet (1973) and Dash cites his own fondness for pioneering animator Winsor McCay.

Despite all the influences that have been brought to bear on Cryptozoo, it still very much feels like its own creature. An animated feature aimed at teenagers and adults, there is nothing quite like it out there at present. You have to admire its storytelling energy and individuality and can only concur with hippy Matthew that it is a sweet trip.