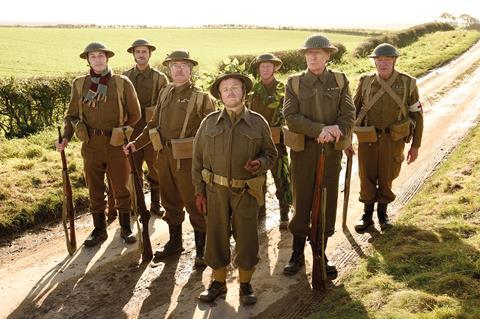 There were rumblings of discontent when this film adaptation of the long-running UK television sitcom was announced. A British institution was surely about to be defiled. The dissenters needn’t have worried. The filmmakers – producer Damian Jones (The Iron Lady, The Lady In The Van), director Oliver Parker (Dorian Gray, The Importance Of Being Earnest) and writer Hamish McColl (Johnny English Reborn) – were canny enough to realise that the highly conservative core audience for this film would not take kindly to a reboot.

The result is a film which shares so much DNA with its source material, it could arguably be viewed as the most successful experiment in cloning since Dolly the sheep. The only nod to a more contemporary style of humour is a blooper reel that runs during the end credits.

As the success of The Best Exotic Marigold Hotel and its sequel demonstrated, the commercial potential of films targeted at the grey pound should not be underestimated. That said, the absence of strong sympathetic female characters, combined with an almost aggressive level of cosy Britishness, could hamper the film’s prospects in territories where the original series is less well-known.

Dad’s Army, which ran for nine years between 1968 and 1977 and totaled 80 episodes, told of the exploits of the UK’s volunteer Home Guard during the Second World War in the fictional seaside town of Walmington-on-Sea. For the film version, locations in East Yorkshire including Bridlington and Beverley have been pressed into service, and the backdrop meticulously recreated.

Equal attention to detail was paid to the casting. Toby Jones is an inspired choice for Captain Mainwaring, the role originally played by Arthur Lowe, who became a household name in the UK starring in the series. More than anyone else in the cast, Jones has been able to insert his own stamp onto the character while ensuring that the endearingly pompous Home Guard captain of the series is entirely recognisable. Jones’s gifts as a physical comedian are put to great use, particularly in a scene in which he tries to look dignified while choking on a cake.

Elsewhere, Bill Nighy seems slightly hamstrung by the legacy of John Le Mesurier in the role of Mainwaring’s second-in-command, Sergeant Wilson, while Tom Courtenay delivers an uncanny impersonation of Clive Dunn as Lance Corporal Jones. Younger cast members include The Inbetweeners star Blake Harrison, who takes the role of ineffectual mummy’s boy Private Pike, following in the shoes of Ian Lavender (who has a cameo here as a Brigadier).

Catherine Zeta-Jones slinks around the chintzy streets of Walmington as Rose Winters, a glamorous lady journalist whose arrival to write a feature on the Home Guard causes the hapless men to descend into buffoonery. Zeta-Jones vamps tirelessly, but the role is a tad underwritten and lacking the spiky one-liners popularised by the smart-talking screwball heroines on which her character is clearly based.

The risk-averse approach to the remake extends to the humour. Pratfalls and benign double entendres (“I saw you slip her a sausage!”) rub shoulders with familiar gags and catchphrases which have been lifted wholesale from the original series. Fittingly for a film which has a running joke about jam roly poly, this feels like cinematic comfort food.