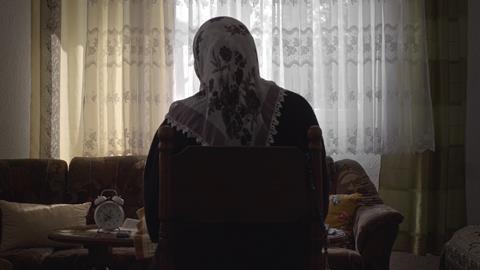 A documentary counterpart to Jasmila Zbanic’s Oscar-nominated, widely-distributed Quo Vadis, Aida?, Kumjana Novakova and Guillermo Carreras-Candi’s elliptically spare Disturbed Earth evokes the 1995 massacre at Srebrenica, Bosnia & Herzegovina, in which more than 8,000 people were murdered over a 12-day period. World-premiering in the non-fiction Competition at the country’s leading film-festival, Sarajevo, this is a work of bare-minimum feature length (credits roll at the 68-minute mark) which packs considerable amounts of observation, emotion and detail into its brisk running-time. Further festival exposure is a given, especially at events favouring political and human-rights themes.

A reflective, ruminative tribute to the dour persistence of the human spirit and its capacity to endure the most horrific of circumstances

The writing-directing duo — Carreras-Candi hails from Catalonia, Novakova is Macedonian — are based in Sarajevo, where they run the Pravo Ljudski documentary film festival. Having previously collaborated on a small handful of co-directed shorts, they now adopt various strategies to tackle the enduringly painful subject of the genocidal slaughter (whose victims were Bosniak men and boys), and also to portray the present-day small town itself.

A former industrial centre located among deep forests in the autonomous Republika Srpska area of Bosnia & Herzegovina, Srebrenica now has a depopulated, shellshocked feel. Numerous abandoned buildings and factories litter the hilly landscape on the banks of the fast-flowing river Drina. Over the course of four years, the directors (Carreras-Candi also working as cinematographer) recorded the sights and sounds of the place, interviewing a small handful of survivors and recording commemorative events.

The film begins in 2015, in sombre style with the belated burial of victims at the town’s sprawling cemetery-cum-memorial. Green-wrapped coffins are reverently taken from a flower-garlanded truck, passed high among the mourners, then interred in the rich, brown Srebrenica soil. The “disturbed earth” of the title refers to the presence of mass graves identified via aerial photography, steelily presented for our inspection in the picture’s second half. Every few minutes throughout the film valuable breathing-space is provided by elliptical, haiku-like poetic musings — presented baldly, in white text on a black screen, in either English or the Bosnian language: “We lower our heads. To take the weight of the unspeakable.”

Working with Belgrade-based editor Jelena Maksimovic, Carreras-Candi and Novakova compile a compendium of footage including a judicious selection of archival materials shot before and after the massacre. Those scratchy videos stand in effective contrast to the limpid digital visuals of the sequences shot for the film itself.

A chillingly recurrent figure in the 1990s footage is the notorious mastermind of the massacre, the deceptively jovial-seeming General Ratko Mladic of the Bosnian-Serb army, who in 2017 was sentenced to life in prison for war crimes. But the directors are more intimately concerned with the ordinary, now-elderly folk who stand as living testament to the horrors of summer 1995. In fly-on-the-wall scenes, senior citizens Srecko, Mirza and Mejra are depicted going about their daily business; we observe villagers engaged in farming activities that barely seem to have changed over the decades or even centuries.

Time flows differently here; even a quarter of a century later, the tragic past weighs heavily upon these taciturn folk (“I feel like I am the only one who survived.”) But does life go on, even in the wake of such an epochal atrocity? Apparently so; Disturbed Earth functions effectively as a reflective, ruminative tribute to the dour persistence of the human spirit and its capacity to endure the most horrific of circumstances.